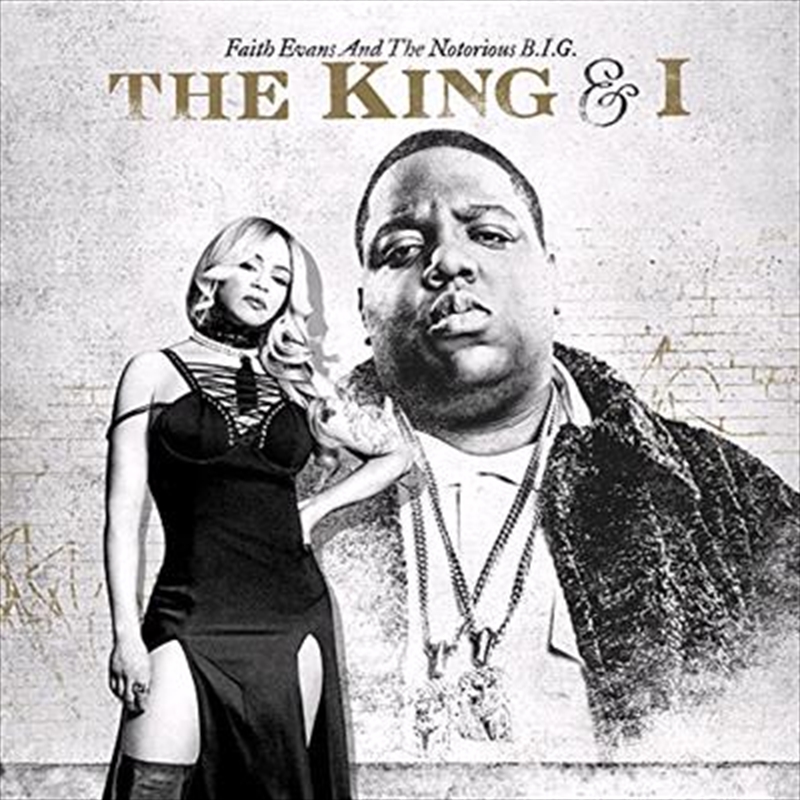 Faith Evans and the Notorious B.I.G. The King & I Vinyl

Faith Evans and The Notorious B.I.G. famously met at a photo shoot in 1994 and were married nine days later. What followed would become one of the most legendary love stories in hip-hop history.

Evans has now, 20 years after B.I.G.'s still unsolved murder, created THE KING & I, a new album that tells the story of their life together. The album's 25 tracks feature newly recorded vocals by Evans melded with vocals by Biggie Smalls, some well-known but also a selection of rare and unheard rhymes from the B.I.G. vault. 'The King & I' also includes an impressive list of guest appearances by rap royalty including Busta Rhymes, Jadakiss, Lil' Cease, Lil' Kim, Sheek Louch, Styles P, and Snoop Dogg. Evans has also brought on some of the most acclaimed producers in hip-hop, many of which produced some of B.I.G.'s most famous tracks, including DJ Premier, Just Blaze, Salaam Remi, Stevie J, and Chucky Thompson.

"I remember telling Ms. Wallace years ago that one day it would be really dope if I could do something similar to Natalie & Nat King Cole's Unforgettable," says Evans. "Knowing the love that B.I.G. had for Tyanna & Ceejay, I feel it's my duty to uphold & extend his legacy, especially his musical contributions. This project is my creative reflection of the love we had & the bond we will always have. I'm elated to share this musical journey with our fans!"

In addition to the constellation of stars who appear on 'The King & I,' there is one other very special guest: Biggie's mother, Voletta Wallace. Her voice is featured, along with those of Evans and Biggie, on multiple interludes that provide a poignant narration of the album. Other guest stars adding harmonies to the interludes include 112, Kevin McCall, Chyna Tahjere, and Jamal "Gravy" Woolard, who famously portrayed B.I.G. in the 2009 film Notorious.

Faith Evans has enjoyed worldwide success as an award-winning singer, songwriter, actress and writer. She has recorded eight studio albums, including the back-to-back platinum smashes, Faith (1995) and Keep The Faith (1998). "I'll Be Missing You," her tribute to Biggie, debuted at #1 in 1997, stayed there for 11 weeks, and won the Grammy Award for Best Rap Performance by a Duo or Group. Since then, the singer has been nominated for a Grammy Award seven times. In 2008, she released her autobiography, Keep the Faith: A Memoir, which won the African American Literary Award for Best Biography/Memoir. Last year, she took part in the Bad Boy Family Reunion Tour to commemorate the influential record label's 20th anniversary.

Today, The Notorious B.I.G. is widely recognized as one of the world's most influential rappers and has sold more than 17 million albums in the U.S. alone. Before his murder in 1997, Christopher Wallace recorded two classic albums as The Notorious B.I.G. His debut Ready to Die arrived in 1994 and helped revitalize the East Coast rap scene with massive hits like "Big Poppa" and "Juicy." Life After Death was released in March 1997 just weeks after he was shot and killed in Los Angeles. The record topped the U.S. album charts and featured the hits "Hypnotize" and "Mo Money Mo Problems." It remains one of the few hip-hop albums to ever achieve Diamond certification from the RIAA.
DETAILS

18. When We Party featuring Snoop Dogg