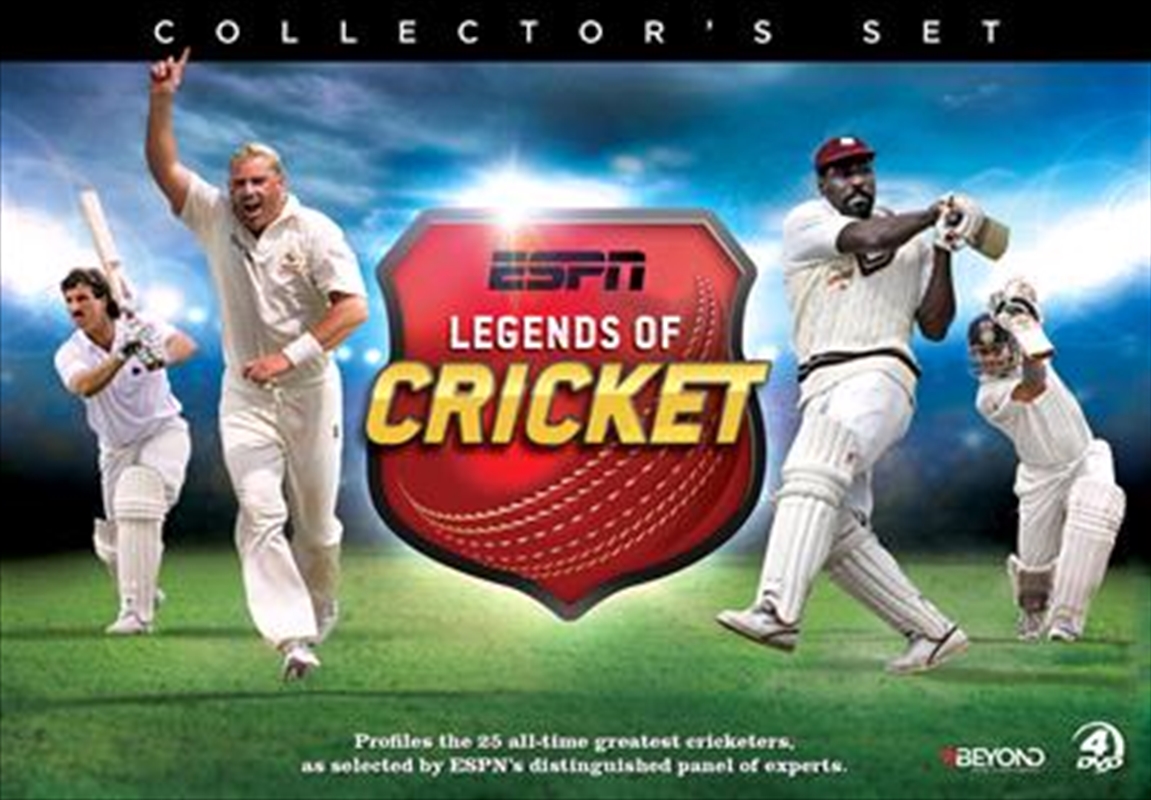 DESCRIPTION
DISC 1 - Allan Border - The epitome of the fighting Australian, Allan Border took over the reins of the side when they were at their lowest ebb, and leading by force of will and example, he took them to the threshold of world-champion status.
Barry Richards - No other cricketer made such an impact, and gave rise to such speculation of what he might have been, in a career of four Tests. Nine hundreds before lunch and 1000 runs in a season 15 times in first-class cricket add to his legend.
Steve Waugh - Steve Waugh, the embodiment of true Australian grit, evolved from a raw 20-year-old talented batsman and medium-pacer into a cricketer who eliminated risk from his game. He led Australia in 15 of their world-record 16 consecutive Test wins and to the 1999 World Cup title, playing 168 Tests and collecting 10,927 runs on the way
Kapil Dev - Kapil Dev was India's greatest fast bowler, their greatest fast-bowling allrounder, and led the team to their finest triumph: the 1983 World Cup title.
Wasim Akram - Perhaps the best left-arm fast bowler of all time, Wasim Akram could make the ball walk and talk like no one else did. An explosive, exciting genius who could change the game with the bat as well.
DISC 2 - Sir Len Hutton - Widely regarded as the finest, most technically correct England batsman after the Second World War, Len Hutton broke the world-record score in his sixth Test. He was also England's first professional captain.
Sir Frank Worrell - West Indies' first appointed black captain was also their most charismatic and influential. Though a fine, stylish batsman, it is as a strong captain and an uniting force that he will be remembered. The affection with which his team was received in Australia during the landmark tour of 1960-61 is enshrined in the trophy named after him, which the two teams play for to date.
George Headley - The black Bradman, George Headley was unstoppable at every level of the game, making runs with a style and brilliance few have ever matched, and setting the standards for generations of West Indian players to follow
Greg Chappell - With a century in his first and last Tests, 22 others in between, and a career average of 53.86, Greg Chappell was the foremost Australian batsman of his generation. A formidable talent, he also had the iron self-will to harness his abilities to best effect.
DISC3 - Malcom Marshall - Malcolm Marshall was perhaps the finest of West Indies' many formidable fast bowlers of the 1980s, endowed with fierce pace, swing, cut, a vicious bouncer, and above all, the ability to outthink any batsman
Graeme Pollock - South Africa's player of the 20th century, and perhaps the finest left-hand batsman the game has ever produced, Graeme Pollock played only 23 Tests, but those were enough to rank him among the game's all-time greats.
W.G Grace - Cricket's first big draw in more ways than one, Grace with his towering presence revolutionised batting, brought cricket to a mass audience and transformed cricket in England into the unrivalled spectator sport of the summer
Keith Miller - Flamboyant, insouciant and hugely gifted, Keith Miller was Australia's finest allrounder - and among the world's best - able to turn a match with bat or ball, and as dashing off the field as he was on it
DISC 4 - Sir Richard Hadlee - The finest cricketer New Zealand has produced, Richard Hadlee was a bowler of devastating control and intelligence: the first to 400 Test wickets; and one of the four great allrounders of the 1980s.
Sir Ian Botham - One of the finest allrounders of all time, Ian Botham was the fastest to the double of 1000 runs and 100 wickets. An English icon, full of endless self-belief, he could change the course of a game in an afternoon. With him, England were a side to reckon with; without him they were abysmal
Sunil Gavaskar - Sunil Gavaskar was the first to get 10,000 Test runs and 30 centuries. India's lynchpin of the 70s and 80s, and arguably their first great batsman, he was known for his immaculate defence but was equally at ease hooking and pulling the most fearsome.
DETAILS