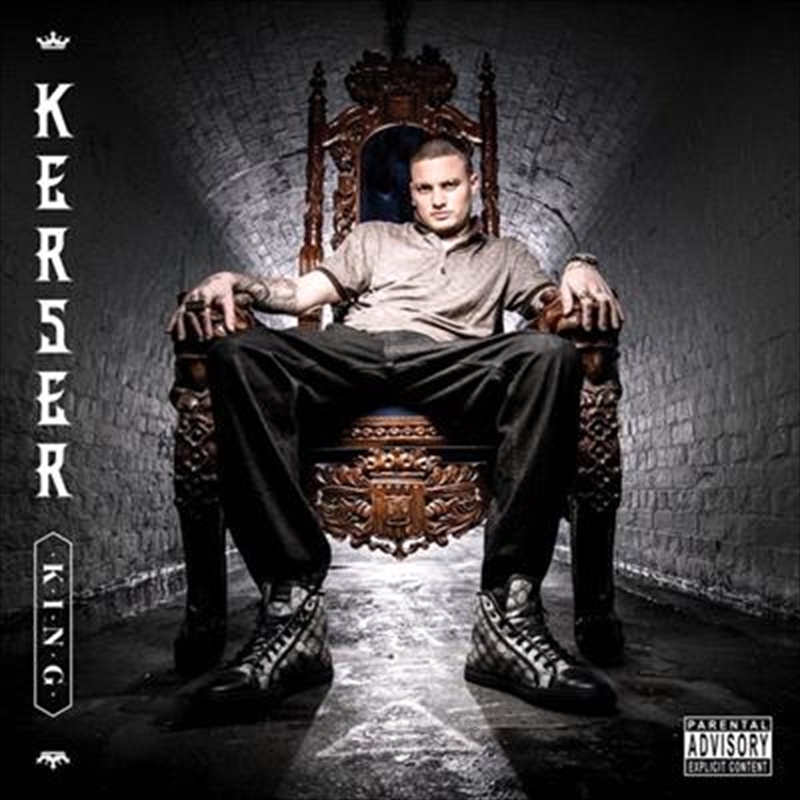 Kerser’s 4th LP in as many years, KING is by far his best and most accessible, despite being the most brutal.

A success story no one predicted, MC Kerser is the most polarising voice in Australian hip hop, epitomising the notoriously hard-living suburbs of Sydney’s outer west.

With trademark, unapologetic, honesty, KING documents Kerser’s incredible trajectory from his stomping ground in Sydney’s West [‘C-Town’], the fight he’s undertaken to get out [‘Put Life in Rap’] and the hard-won realisation that success creates its own problems [‘Forever’.]

Though championed by the marginalised society he emerged from, some early fans have fallen by the wayside, accusing Kerser of flaunting success. The industry you’d think would respect the numbers, appear to see the rapper as too close to the crime-ridden scenes he’s been forced to leave. It’s a fascinating, no doubt frustrating, situation for the fiercely loyal, unashamedly honest and humble MC.

Stuck in the middle, Kerser rejects self-pity, using the dichotomy as a source of strength, making KING his best album yet. Accessible, despite its brutality, with storytelling at its sharpest and Nebs production never better, KING is headed for the top of the charts, with a special fold-out poster included with the physical CD for the fans who keep Kerser there. It’s the relationship with supporters that forces the music industry to reconsider success; despite his hard upbringing, Kerser inspires legions of fans to push harder, and expect more.

Initially gaining notoriety in an emcee battle with 360, before nearly breaking YouTube with his promo clips [clocking up to 100,000 views in 48 hours], first record The Nebulizer [2011] signaled Kerser’s deadly serious intentions. Second album, the ruthless No Rest For The Sickest hit #1 on the ARIA Urban charts, #1 on the iTunes Hip Hop charts, and #14 on the overall iTunes charts [and was ‘Most Stolen Album From JB HiFi’], before the tour DVD debuted at #1 on the National ARIA Charts, beating P!nk. By then a festival veteran, and selling out shows nationally, fashion labels approached him for endorsements – usually the other way round - which saw sales tripling when he showed garments on social media.

Third LP S.C.O.T [2013] was held at #2 on the iTunes charts by superstar Katy Perry. A week later S.C.O.T was #5 on the main ARIA Charts and #1 on the ARIA Urban Charts. The S.C.O.T. National Tour DVD [Sept, 2014] provided never-seen insight, debuting at #2 on the ARIA Charts. Held back by Hillsong Church, Kerser was still ahead of The Wiggles Best Of, Queen Live At Wembley Stadium and Andre Rieu in the Top 5 showing how his fans return the love and loyalty he’s shown them.

One of the most humble artists in the game, Kerser is finally gaining respect, despite sticking to his self-belief – a trait sometimes mistaken for cockiness. His unconventional rise to fame, free from the filtration of radio programmers and the limitations of genre quotas, created a loop hole in the system. Accumulating well over 220,000 Facebook fans and more than 15 million YouTube views with little to no radio play, Kerser has risen to the top by telling his story without filter. An unlikely hero if ever there was one, Kerser has become an icon for hope, resilience and resourcefulness, inspiring hundreds of thousands nationally.

4. Lonely At The Top