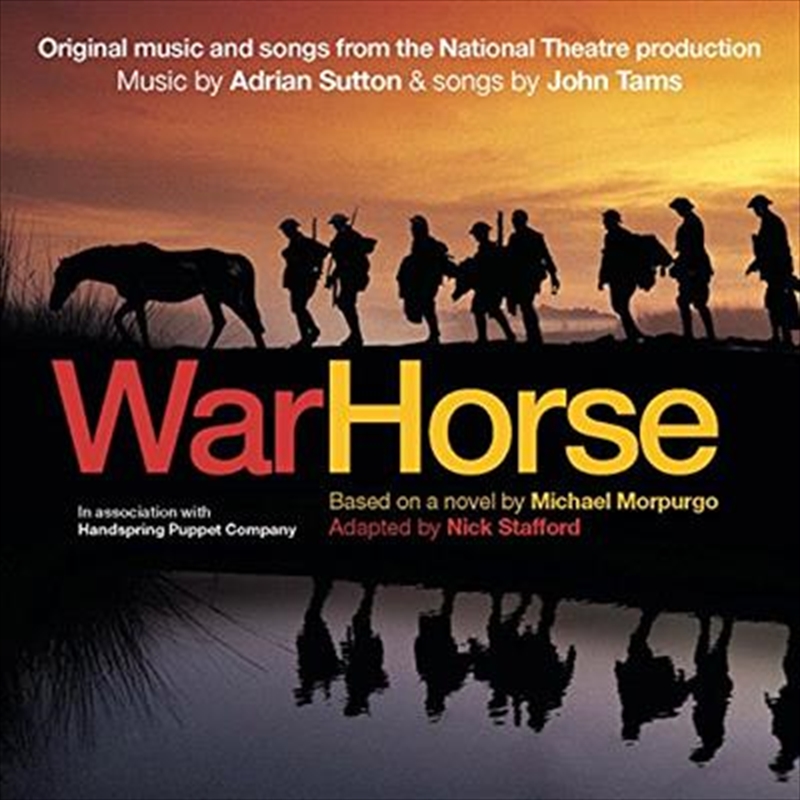 DESCRIPTION
Sony Music is delighted to announce the release of the original music and songs from War Horse, an award-winning production from the National Theatre in London that will be coming to Australia.

The story is set in World War One, when the horse Joey, the adored companion of a boy called Albert, is sold to the cavalry and taken away to France. There Joey is caught up in enemy fire and leads a perilous existence amid death and disease that spare neither men nor horses. His fate is to serve on both sides of the conflict, until his amazing odyssey leaves him alone in no man’s land. Albert cannot forget his beloved Joey and, though not old enough to fight, undertakes a perilous journey to the trenches to find the horse and bring him home.

This highly emotional drama had the critics crying into their handkerchiefs and was an overnight sensation after opening at the National Theatre in London in 2007. It sold out for two seasons and, continuing its run at the New London Theatre, saw its millionth audience member in 2011. The impact of the production owes much to its life-sized puppets created by South Africa’s Handspring Puppet Company, who bring breathing, galloping horses to life on the stage, but the moving music and stirring songs are also a highly praised part of the experience: "War Horse couldn't work without its extraordinary musical score” (Tom Morris, director of the National Theatre, London).

The original music was written by London-based composer Adrian Sutton, who works mainly for the theatre. His compositions for War Horse gained him the honour of an invitation to adapt it into a 20-minute orchestral suite that was premiered by the Royal Philharmonic Orchestra. The songs are by a leading English folk singer, John Tams, twice winner of Album of the Year in the BBC Radio Two Folk Awards. One of the six nominations that War Horse received for the Olivier Awards was for Best Sound, a tribute to the work of Tams, Sutton and sound designer Chris Shutt.

In March 2011 War Horse, which is based on a children’s book by the British author Michael Morpurgo, opened in New York City and won five Tony Awards there. The play is scheduled to be staged in Melbourne, Sydney and Brisbane.

In total the recording comprises 23 tracks of “evocative music by Adrian Sutton and moving songs by that great folkie, John Tams” (Daily Telegraph). It will appeal to everyone who has already felt the overwhelming power of the show, and countless more who will soon join the audience.

The Year Turns Round Again

The Scarlet And The Blue

The Year Turns Round Again