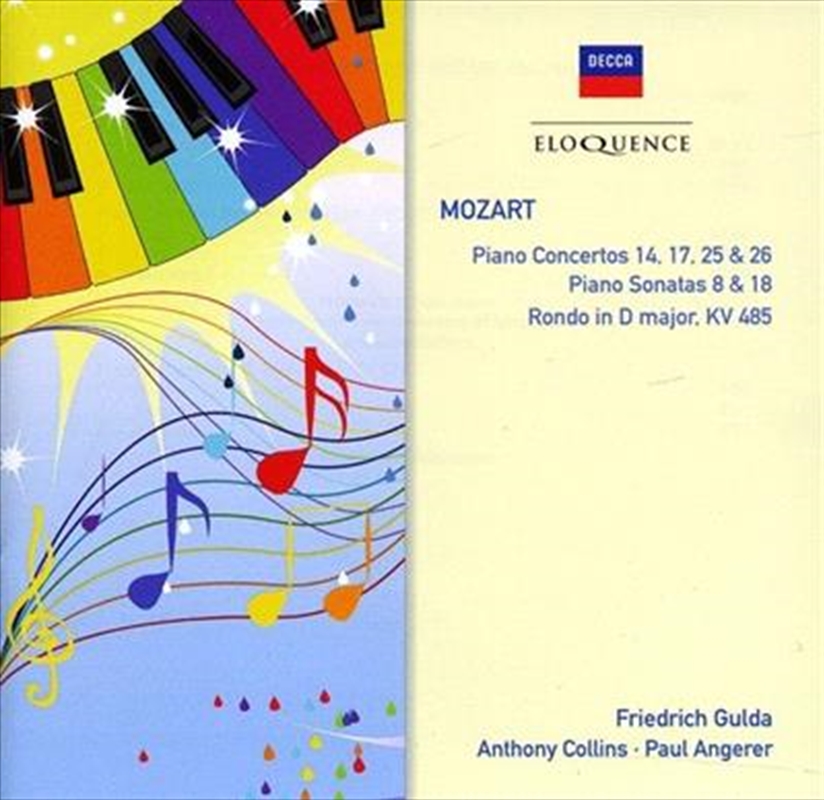 Shipping - See delivery options.
Postcode:
Quantity:
SEE MORE IN:
2 for $40 Music All 2 for $40
DESCRIPTION
Friedrich Gulda has become something of a cult figure in the music world. This 2CD set presents him in Mozart recordings - both concertos and solo works - largely for Decca, with one item, the Piano Concerto No. 17, recorded for Amadeo. Born in Vienna in 1930, Gulda began formal lessons aged seven with Felix Pazofsky, and within five years had graduated to the Vienna Music Academy. The Viennese classics - especially Mozart and Beethoven - quickly established themselves at the heart of Gulda's performing repertoire but he was also a remarkable jazz performer. It was while he was rapidly absorbing jazz into his musical bloodstream that Gulda cut his first Mozart concerto recordings for Decca, starting in 1954 with KV 449. His accompanists, as on the coupling of KV 505 and 537 recorded almost exactly a year later, were the New Symphony Orchestra of London, a studio ensemble of hand-picked players, and conductor-composer Anthony Collins, who during the same period recorded the first complete cycle of Sibelius's symphonies with the London Symphony Orchestra. What strikes one in particular about these recordings is their surprisingly 'modern' approach, free of Romantic rhetoric, with speeds effortlessly maintained and rhythms kept buoyant and sparkling, matched by a beguiling textural clarity and staccato precision. The more overtly affectionate Viennese recording of KV 453 dates from 1960 and features another ad-hoc group, this time selected by Gulda himself, under Paul Angerer, a Hans Swarowsky prot g who was then rapidly establishing his conducting credentials having spent the early part of his career playing viola in the Orchestre de la Suisse Romande and Vienna Symphony Orchestra. Mozart's piano sonatas are often treated as second-class citizens by comparison with the concertos, yet for Gulda they were an essential part of his creative output. 'The sonatas are private preliminary conversations leading to the operas,' he reasoned. Gulda's first recordings for Decca were captured in 1947 and the following year he turned his hands to Chopin and Mozart's KV 576 Sonata, a reading whose micro-inflected tonal purity and seamless cantabile is reminiscent of Dinu Lipatti.