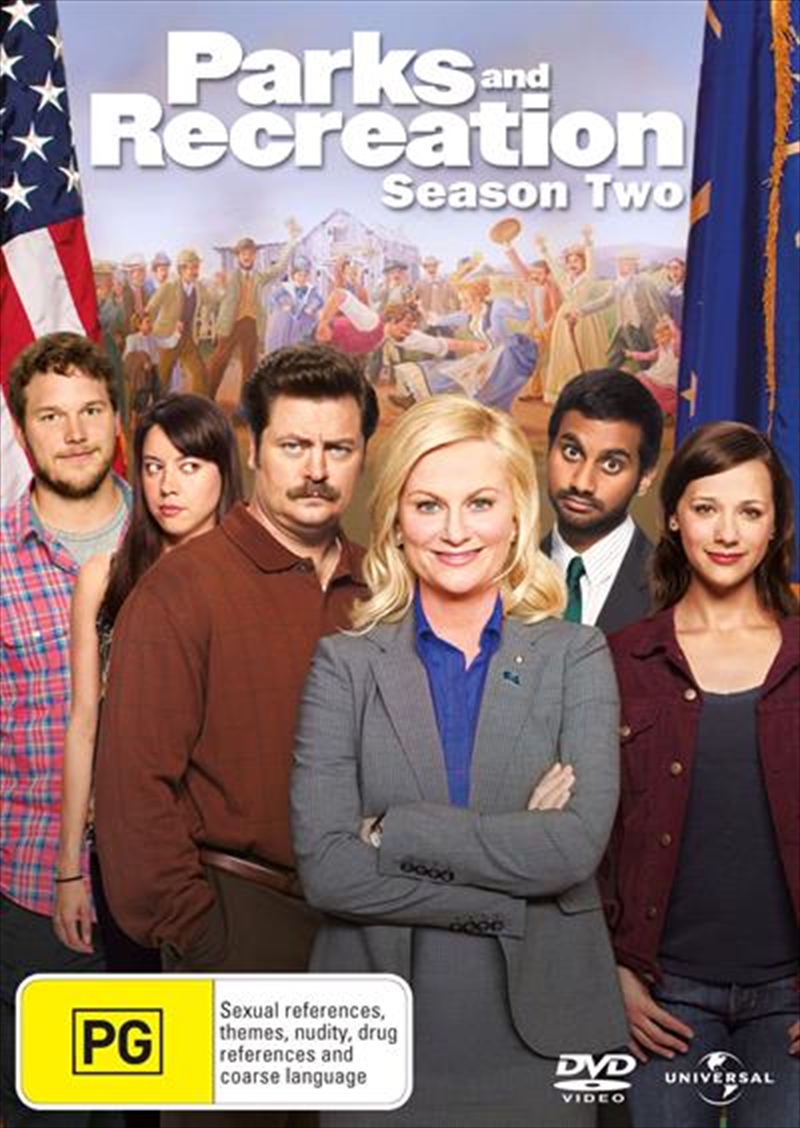 Shipping - See delivery options.
Postcode:
Quantity:
SEE MORE IN:
Parks And Recreation Movies & TV Clearance TV Clearance Sale
DESCRIPTION
&lt;H3&gt; Parks And Recreation Season 2 DVD - On Sale Now With Fast Shipping&lt;H3&gt;
What a difference a season makes. If they gave an Emmy for most improved series, Parks and Recreation would have been a shoo-in for its turnaround second season that ranks atop the Ron Swanson Pyramid of Greatness. An Emmy for being TV's funniest series would not have been out of line either. Everything works, from the seamless ensemble and pitch-perfect character-based humor to the deft direction in the mockumentary style of The Office. Unlike Michael Scott, however, Emmy nominee Amy Poehler's Leslie Knope is competent to a fault. The deputy director of the Pawnee, Indiana, parks department, she's a stick-in-the-mud, dyed-in-the-wool bureaucrat. But her insane work ethic and maniacal devotion to her job has earned her the grudging respect of her less-than-enthused coworkers, including Swanson (Nick Offerman, a master of the deadpan), her libertarian, antigovernment boss; Tom Haverford (Aziz Ansari), always on the make but a sheep in wolf's clothing; April Ludgate (Aubrey Plaza), a disaffected Daria type; the hapless Jerry (Jim O'Heir), who gets less respect than Meg on Family Guy; and sassy Donna (Retta Sirleaf). Unlike other workplace comedies, Knope is not the calm center around which an engaging group of goofballs orbits. The voices of reason in this series belong to Leslie's best friend Ann (Rashida Jones) and her boyfriend Mark (Paul Schneider), whose relationship is one of the through lines of this season. The breakout star this season is Chris Pratt as simple-hearted lug Andy, who gets a job running the city hall shoeshine stand where he can pursue Ann, his former girlfriend, but who enters into a sweetly played Jim and Pam-like friendship/romance with April. Very special episodes include "Ron and Tammy," featuring Megan Mullally (Offerman's real-life wife) as Swanson's scheming ex-wife Tammy, who works for the library, the inexplicable bane of Leslie's existence; "Hunting Trip," in which Leslie proves herself worthy after imposing herself on a guys-only bonding weekend; and "Practice Date," in which Leslie panics over her first date with a decent, straight-shooter cop (Louis C.K.). As in Modern Family, each episode is brimming with hilarious bits of business (like Andy's "I am on hold" song and April's lesson in the art of the spit take in "Hunting Trip"), character grace notes (Ron's alter ego, a smooth jazz smoothie named Duke Silver), and unexpected touching moments that ground the series.
DETAILS