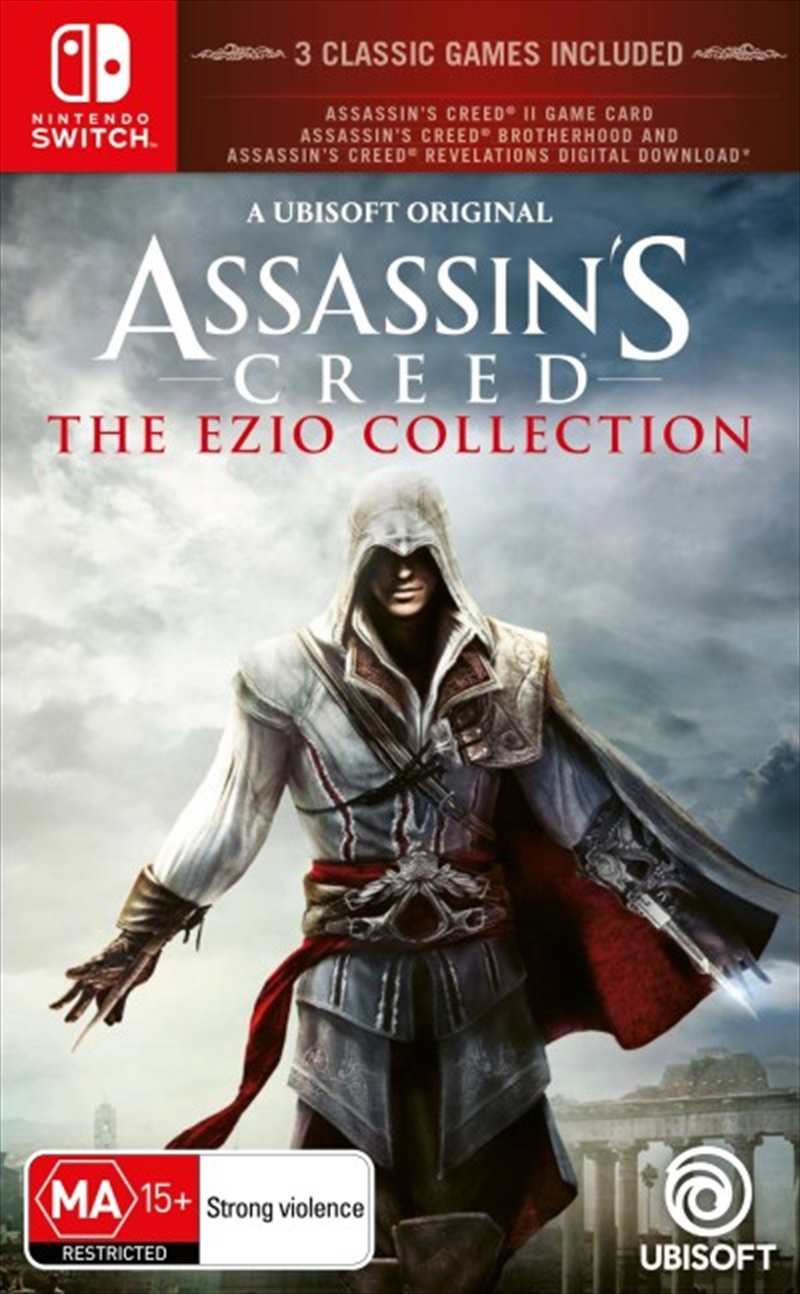 Experience the award-winning Assassin's Creed series as you become Ezio Auditore da Firenze, the most celebrated and iconic Master Assassin in the franchise. Learn the ways of the Assassins and seek vengeance for the betrayal of your family. Journey through 15th-century Renaissance Italy and become the most legendary leader of the Assassin Brotherhood, then embark on a final quest of discovery as you learn the truth about the Creed.

Assassin's Creed II: Ezio's saga begins as you fight and explore the open world of the Italian Renaissance, including Florence and Venice, in an era of art, riches, and murderous conspiracy.

Assassin's Creed Brotherhood: Journey into Italy's greatest city, Rome, the centre of power, greed, and corruption, as Ezio takes leadership of the entire Brotherhood of Assassins.

Assassin's Creed Revelations: Embark on Ezio's final adventure as he walks in the footsteps of his great mentor, Altair, on a journey of discovery and revelation in 16th-century Constantinople and the heart of the Ottoman Empire.

This version of the collection includes enhanced features for the Nintendo Switch system, including Handheld mode, HD Rumble, a touch screen interface, and an optimized HUD.

Become a Master Assassin: Perfect your skills as a Master Assassin across three acclaimed narratives featuring open-ended missions. Swiftly eliminate your adversaries with a variety of lethal weapons, disarm enemies and use their own weapons against them, and stealthily assassinate your foes with your Hidden Blade.

Live Ezio's Complete Saga: Play as Ezio, the most celebrated and iconic Master Assassin in the Assassin's Creed franchise, on his journey from a young man to the most legendary leader of the Assassin Brotherhood.

Assassin's Creed II: Ezio is a new Assassin carrying on the deadly lineage of his forebears through Renaissance Italy. Confront an epic tale of power and corruption as you hone your art, wielding weapons and instruments designed by the legendary Leonardo da Vinci himself.

Assassin's Creed Brotherhood: Ezio is in an enduring struggle against the powerful Templar Order. Journey into Italy's greatest city, Rome, centre of power, greed, and corruption. This will require not only strength, but leadership, as you command an entire Brotherhood who will rally to your side.

Assassin's Creed Revelations: Ezio must leave his life behind in search of answers. Walk in the footsteps of your legendary mentor, Altair, on a journey of discovery and revelation. This perilous path takes you to Constantinople, the heart of the Ottoman Empire, where a growing army of Templars threaten to destabilize the region.