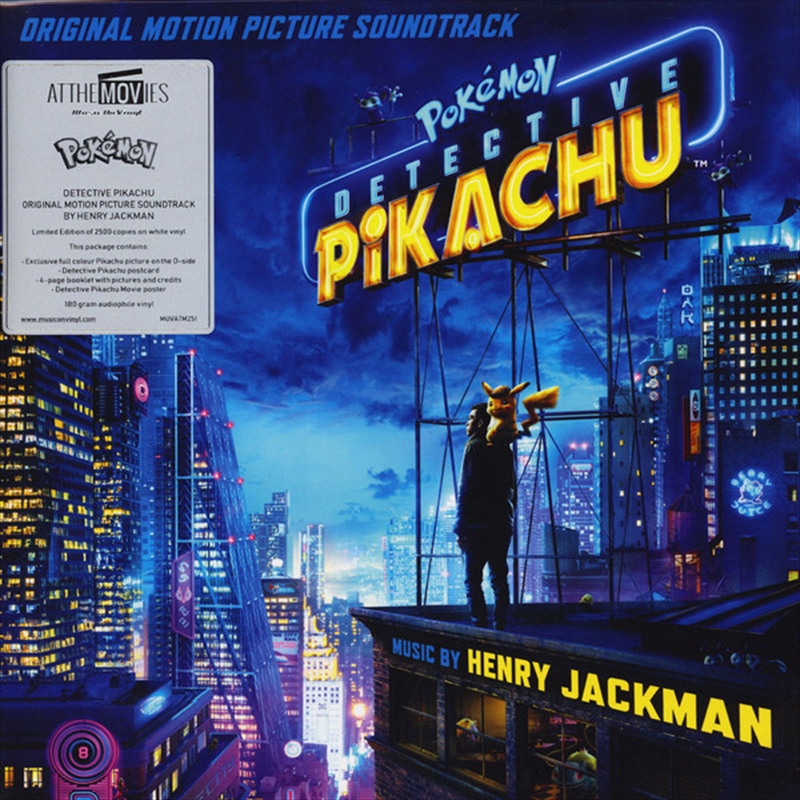 Pokémon Detective Pikachu stars Ryan Reynolds as Pikachu, the iconic face of the global Pokémon phenomenon—one of the world's most popular, multi-generation entertainment properties and one of the most successful media franchises of all time. The music to the movie is composed by Henry jackman (Captain Phillips, X-Men: First Class, Kick-Ass). About the soundtrack he says: “Writing the music for Pokémon Detective Pikachu was immense fun. The movie itself was a unique invitation to create a new musical world representing all the wonderful and colorful characters of the Pokémon  universe.  I really enjoyed using many different sonic colors so, if you listen carefully, you can hear everything from the full symphony orchestra to analog vintage synths. I was also very happy to be working again with director Rob Letterman, who even tried to get his beloved 808 Drum Machine into the score, until we found it was fatally damaged.  To have been selected to write music for such a well-loved and precious franchise is a great honor, and I greatly hope my best efforts contribute positively to the Pokémon experience.

Fans everywhere can now experience a Pokémon on the big screen as never before, as Detective Pikachu, a Pokémon like no other. The film also showcases a wide array of beloved Pokémon, each with its own unique traits and personality. The movie is directed by Rob Letterman, from a screenplay by Dan Hernandez & Benji.

Launched in 1996 to overwhelming response, the Pokémon brand is a global sensation that now encompasses a robust video gaming fandom with over 324 million units sold worldwide; trading card games available in 11 languages with more than 25.7 billion cards purchased; an anime television series in its 21st season that is available in more than 160 countries; and over 20 animated films; as well as books, manga comics, music, toys, merchandise, and apps, including the wildly popular Pokémon GO, that has been downloaded over 850 million times and is enjoyed across the globe by fans of all ages.

Pokémon Detective Pikachu is available as a limited edition on white vinyl. The package includes a beautiful movie poster, extensive 4-page booklet + exclusive postcard. To top it all off we added an exclusive full colour picture of Pikachu on the D-side.

A Key To The Past

The Interrogation Of Mr. Mime

The Forest Of Healing

Shock To The System