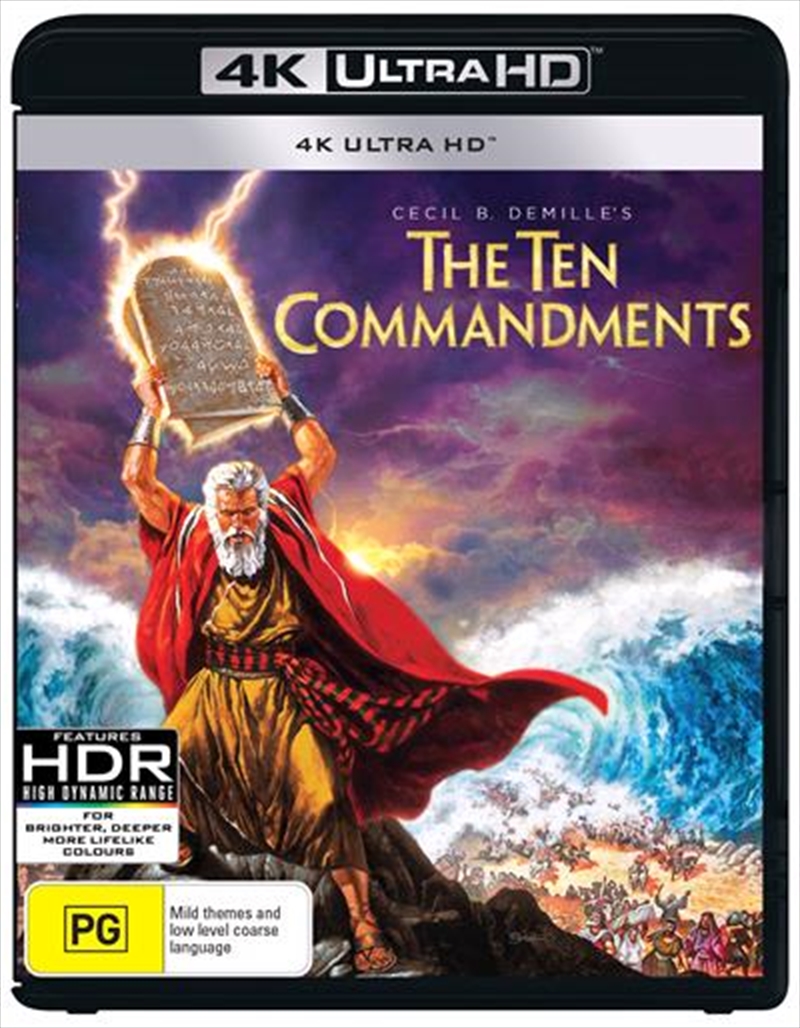 Shipping - See delivery options.
Postcode:
Quantity:
SEE MORE IN:
4K UHD
Based on the Holy Scriptures, with additional dialogue by several other hands, The Ten Commandments was the last film directed by Cecil B. DeMille. The story relates the life of Moses, from the time he was discovered in the bullrushes as an infant by the pharoah's daughter, to his long, hard struggle to free the Hebrews from their slavery at the hands of the Egyptians. Moses (Charlton Heston) starts out as Pharoah's adopted son (and a whiz at designing pyramids, dispensing such construction-site advice as 'Blood makes poor mortar'), but when he discovers his true Hebrew heritage, he attempts to make life easier for his people. Banished by his jealous half-brother Rameses (Yul Brynner), Moses returns fully bearded to Pharoah's court, warning that he's had a message from God and that the Egyptians had better free the Hebrews post-haste if they know what's good for them. Only after the Deadly Plagues have decimated Egypt does Rameses give in. As the Hebrews reach the Red Sea, they discover that Rameses has gone back on his word and plans to have them all killed. But Moses rescues his people with a little Divine legerdemain by parting the Seas. Later, Moses is again confronted by God on Mt. Sinai, who delivers unto him the Ten Commandments. Meanwhile, the Hebrews, led by the duplicitous Dathan (Edward G. Robinson), are forgetting their religion and behaving like libertines. 'Where's your Moses now?' brays Dathan in the manner of a Lower East Side gangster. He soon finds out. A remake of his 1923 silent film, DeMille's The Ten Commandments may not be the most subtle and sophisticated entertainment ever concocted, but it tells its story with a clarity and vitality that few Biblical scholars have ever been able to duplicate. It is very likely the most eventful 219 minutes ever recorded to filmand who's to say that Nefertiri (Anne Baxter) didn't make speeches like, 'Oh, Moses, Moses, you splendid, stubborn, adorable fool'.