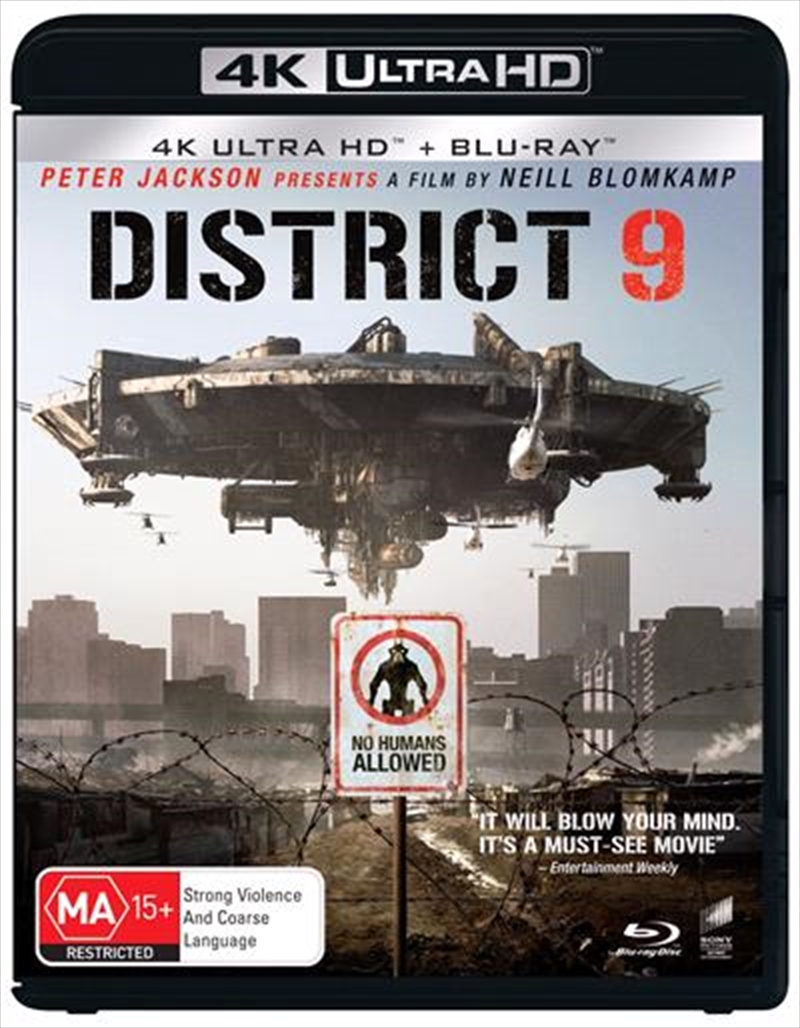 From producer Peter Jackson and director Neill Blomkamp comes a startlingly original science-fiction thriller where alien refugees, stranded on Earth, are exiled to a slum on the fringes of Johannesburg.

Review of District 9 by Christopher Pattison


In 2009 writer/director Neil Blomkemp and Executive Producer Peter Jackson re-invented the science-fiction genre with ‘District 9’, delivering a new breed of sci-fi. ‘District 9’ presented thought-provoking racial themes in a different and unique setting. The film follows the violence that ensues after an extra-terrestrial race forced to live in slum-like conditions on Earth in Johannesburg, South Africa. This race of other-worldly beings who find a kindred spirit in a government agent exposed to their biotechnology. This film has become one of my favourite science-fiction films of the modern error, so this 4K Ultra HD (4K UHD) release was a highly anticipated release for me. SO how was ‘District 9’?
‘District 9’ still remains just as amazing as it was 11 years ago upon its initial release. This 4K UHD release is easily the best this film has looked. The sound, the special effects, the way the film looks overall is incredibly impressive. The themes of the film still are extremely relevant today, the film deals with themes of apartheid. Sharlto Copley as Wikus Van De Merwe is fantastic in this film. He starts of as a very unlikable person, but throughout the film, he evolves into a more understanding and kind-hearted person, which is apart of the dramatic irony of him losing his humanity in a physical sense as he transforms into one of the extra-terrestrials. The film tells a compelling and heartfelt narrative as well as combining relevant social subtext as well. The combination of these elements is done so seamlessly, without sacrificing the narrative heft that makes the film as memorable as it is.
‘District 9’ is still as compelling today as it was in 2009. The film is bought to life by a great feature directorial debut from Neil Blomkemp and a great star-making performance from Shartlo Copley as well. The films transition onto 4K UHD is stunning as well. I adore this film and it is the definition of science-fiction classic. I am giving ‘District 9’ a 10/10. Pick up your copy today on 4K UHD from your local Sanity or online!
Chris has written this movie review for Sanity. See more from Chris here