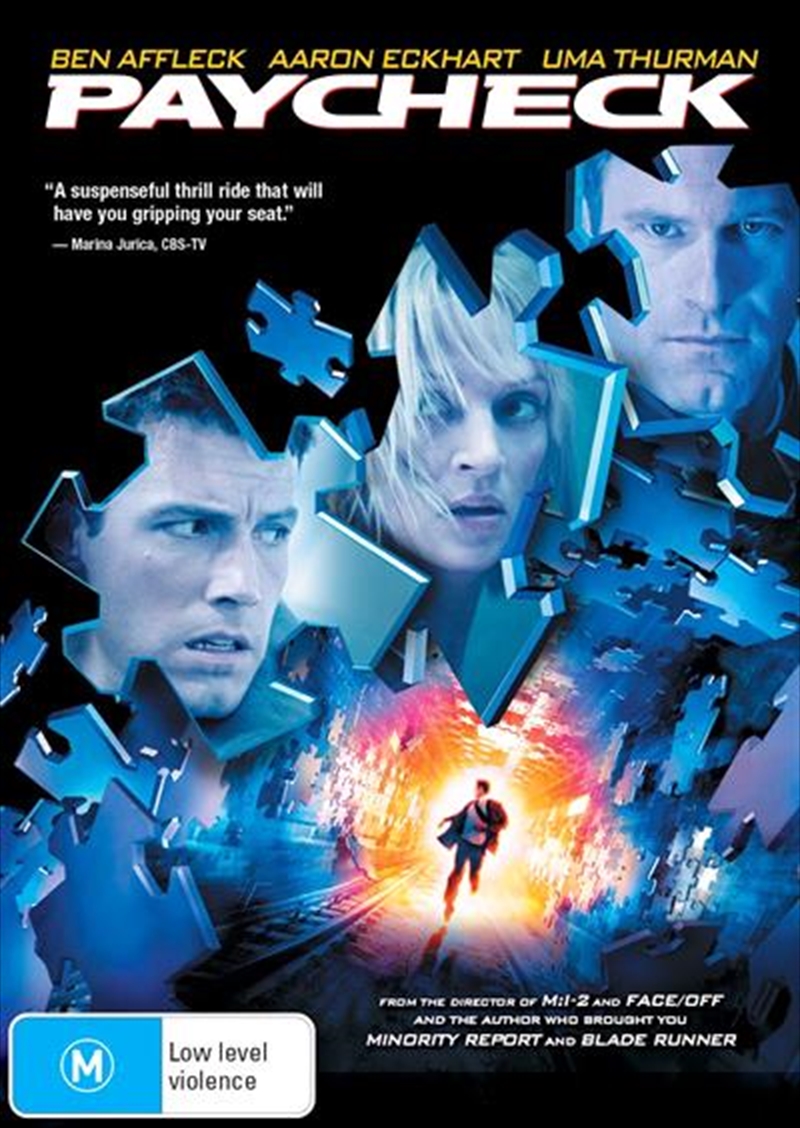 What seemed like a breezy idea for an engineer to net him millions of dollars, leaves him on the run for his life and piecing together why he's being chased.

Review of Paycheck by Christopher Pattison

In the early 2000’s Phillip K Dick short stories were all the rave with the likes of ‘Minority Report’ and ‘Paycheck’ getting adapted into feature-length adaptations of the material. ‘Paycheck’ also picked up martial arts legend and director John Woo at the helm, with Ben Affleck as the lead as well. With an impressive cast featuring the likes of Ben Affleck, Uma Thurman, Aaron Eckhart, Michael C. Hall and Paul Giamatti. With a great action director at the helm, fun source material and a talented cast I was excited to re-visit this early 2000's action/thriller. So how was 'Paycheck'?
‘Paycheck’ is a fun, albeit familiar thriller film, that is elevated by its two leads and fun direction from John Woo. Ben Affleck is great in the film. He has a great on-screen presence and always feels very natural to his character in the film. I thoroughly enjoyed him here. The film features impressive action visuals as well. Director John Woo is notorious for using wire-foo and practical stunt work. For those unfamiliar with wire-foo, it was an eastern filmmaking technique that was popularised in ‘The Matrix Trilogy’. Here Woo uses it sparingly, it is still prevalent, but there is more of an emphasis on practical stunt work and suspense. The film's premise is also handled well, it is fast-paced whilst also slowing down when necessary to develop characters in the film.
The film has a great sense of action and suspense, with John Woo understanding what makes an action film fun, exciting and thrilling. Ben Affleck is great in the lead and the supporting cast of Uma Therman and Aaron Eckart is also a lot of fun in their respective roles. It was a lot of fun re-visiting this film, which was a staple in my early 2000’s movie diet. I am giving ‘Paycheck’ a 7/10. Pick-up your copy of this early 2000’s action gem on DVD today from your local Sanity or online!
Chris has written this movie review for Sanity. See more from Chris here