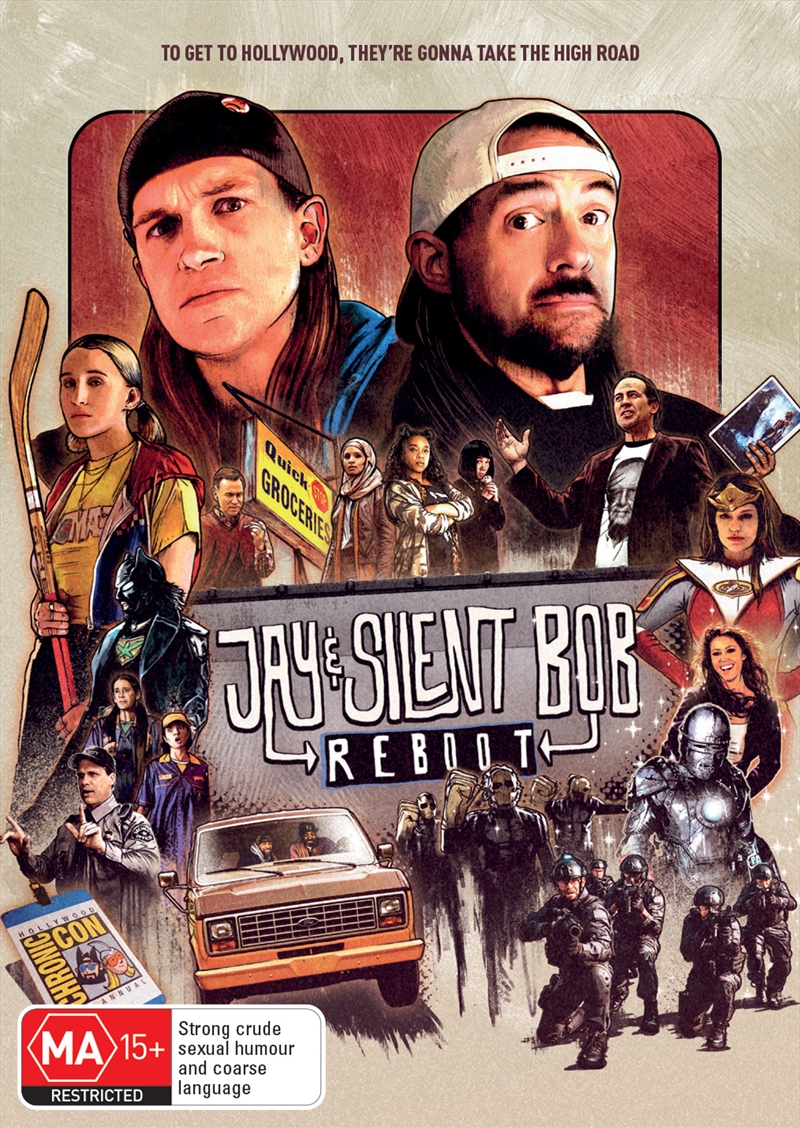 Jay and Silent Bob return to Hollywood to stop a reboot of the 'Bluntman and Chronic' movie from getting made.

Review of Jay and Silent Bob: The Reboot by Eddie @ The Movie Guys

With so much baggage and background, seeing Jay and Silent Bob back together is like spending time with old friends as Jason Mewes and Smith prove, that despite being now to old for this type of thing, they’ve still got it, as the duo find themselves on a cross country journey that is pretty much an excuse for Smith to get the gang back together again in what’s a star-stuffed affair that is going to have Smith die-hards salivating at the very anticipation of whose coming up next.
From old time Smith creations like Ben Affleck’s Holden McNeil, Matt Damon’s Loki, Shannon Elizabeth’s Justice, Jason Lee’s Brodie Bruce and Brian O’Halloran’s Dante Hicks, Reboot is absolutely loaded with throwbacks, character beats and even story conclusions as Smith and his leading collection of players set about ensuring Hollywood doesn’t go ahead with further adventures of Bluntman and Chronic.
With so much reference and homage present across the entire run-time of Reboot, it makes itself a must-watch for long time Smith fans and while it’s by no means as good as Smith’s most accomplished and memorable cult hits, there’s something about the fact Reboot isn’t trying to be anything that it’s not in a movie making climate that often tries it’s hardest to float downstream, even if it would be wise from here on out for Smith to retire these characters from future solo outings.
Final Say –
Far from cinematic greatness, Jay and Silent Bob Reboot is a film for the fans, giving them exactly what they expect in a refreshingly uncompromising manner, making this film a winner for all those that matter.
See more from The Movie Guys on their website

When Jay & Silent Bob made their first appearance in 1994’s ‘Clerks’, it was clear that they would become a cult sensation with fans. Both Jason Mewes (Jay) and the director himself Kevin Smith (Silent Bob) both fit these personas so well, adding to the comedy of the characters and ultimately making them more and more popular with each outing. So much so, that in 2001 they got their own spin off film ‘Jay & Silent Bob Strike Back’. Another cult classic from director Kevin Smith, giving fans what they wanted with tonnes of cameos and the two likeable slackers Jay and Silent Bob at the helm in front of the camera (and behind it). Now here we are in 2020 and the two loveable slackers are back with an all new movie full of whacky gags, fun cameos and insane situations. Was ‘Jay & Silent Bob Reboot’ worth the 18 year wait?
Why yes, yes it was… It is safe to say that if you are a fan of Kevin Smith’s comedic musings and big screen outings, ‘Clerks’, ‘Mallrats’, ‘Chasing Amy’, ‘Jay & Silent Bob Strike Back’ and ‘Cop Out’, then you are going to love this film. It has all the makings of another cult classic sensation from the writer/director with his signature style of comedy sprinkled throughout. Mewes and Smith are great in this film together. They both have great chemistry with one another and really shine on-screen together. The film has tonnes of cameos as well with the likes of Ben Affleck, Matt Damon, Chris Hemsworth, Justin Long, Fred Armisen and Robert Kirkman just to name a few. The film feels like a love letter from Kevin Smith to his fans, with call backs to his other projects and the obvious cameos, with a majority of the cameos featuring actors who have been in Kevin Smith films over the years since the early 1990’s. If you are a fan of Kevin Smith than you have been waiting quite some time to lay eyes on another Kevin Smith project so chances are you already own this one, but for those who are wanting a fun, albeit crazy adventure with two of pop culture’s most notable slackers, jay and Silent Bob, than this one is for you. It is funny, quirky and quite frankly insane and it is well worth your time. I am giving ‘Jay & Silent Bob Reboot’ a 7/10. For the special features alone, this one is well worth your time on Blu-Ray.