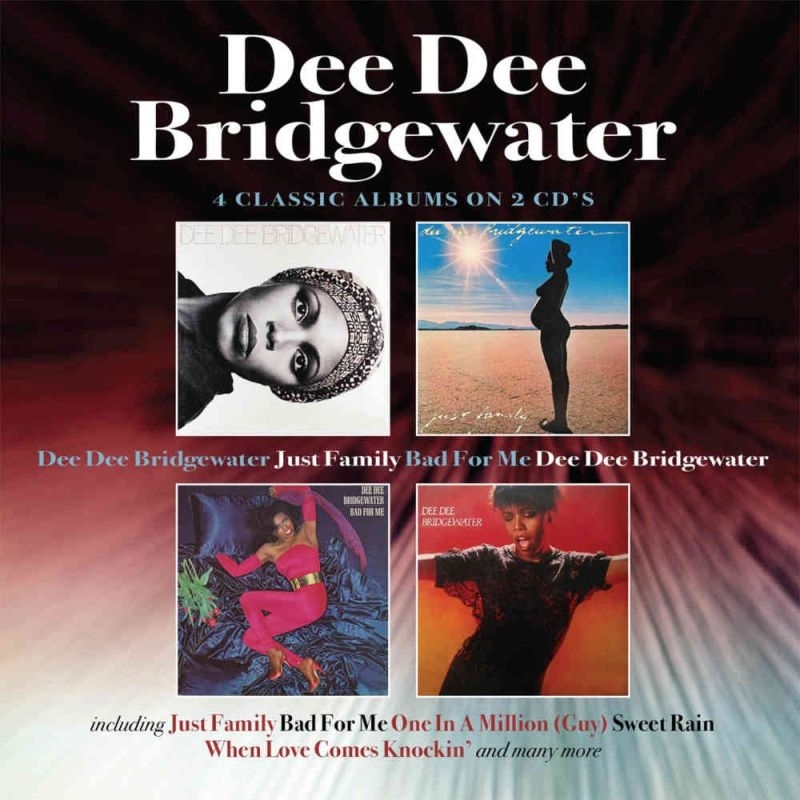 Two CD set. Singer and actress Dee Dee Bridgewater recorded four albums for the Warner Brothers group of labels between 1976 and 1980, one for Atlantic and three for Elektra; for the very first time Robinsongs have combined these albums in this collection.

Dee Dee Bridgewater, the Atlantic album, kicks the package off and features 'Going Through The Motions' and both the fast and ballad versions of 'My Prayer', which were released as singles. The album Just Family completes the first disc and this Stanley Clarke produced album featured a who's who in the jazz funk world, including George Duke, Harvey Mason, Ronnie Foster and Chick Corea to name but a few. Stanley Clarke also played bass on selected tracks.

The Just Family album includes 'Sweet Rain' and 'Just Family', both released as singles and a fantastic version of Elton John's 'Sorry Seems To Be The Hardest Word'. Disc Two kicks off with the George Duke produced Bad For Me album, and the title track was also a Billboard Top 40 R&B hit.

As per previous albums, it also featured some amazing players such as Sheila E on percussion, Greg Phillinganes on keyboards, Alphonso Johnson on bass and Roland Bautista of Earth Wind & Fire fame on guitar. Completing Disc Two is the self-titled Elektra album which was produced by Bell & James and Thom Bell. This 1980 album features the single 'One In A Million (Guy)' and the club classic 'Lonely Disco Dancer'.

05. GOING THROUGH THE MOTIONS

07. EVERY MAN WANTS ANOTHER MAN’S WOMAN

11. CHILDREN ARE THE SPIRIT (OF THE WORLD)

12. SORRY SEEMS TO BE THE HARDEST WORD

09. IS THIS WHAT FEELING GETS?

13. GUNSHOTS IN THE NIGHT

15. THAT’S THE WAY LOVE SHOULD FEEL