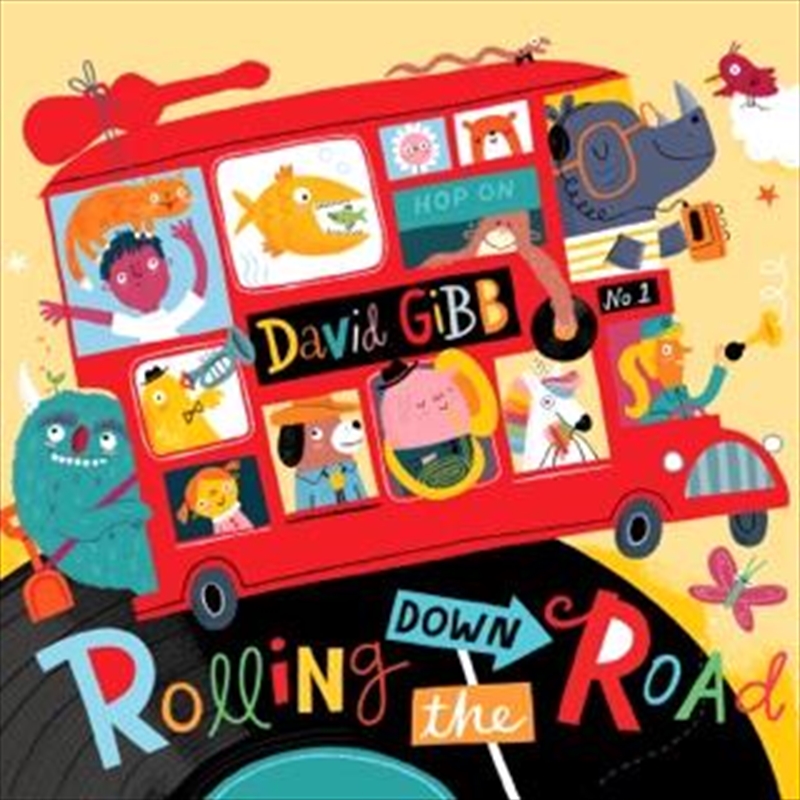 All aboard! Rolling Down The Road is the new album for children and families from David Gibb. If youre a parent then youve no doubt at some point despaired at the lack of quality music available for families. However, all hope is not lost! Family singer songwriter David Gibb is on a mission to write brilliant and engaging songs that will capture the imagination of both children and parents alike. Davids new album Rolling Down The Road fulfils this brief perfectly, as he offers up a whole busload of colourful characters. Whether its falling asleep at the zoo, building a tree house, or looking for buried treasure, Davids songs are filled with an infectious energy that will have children and their families singing along in no time at all.

The new album builds on the success of 2017s Climb That Tree (The children love it and I mean they LOVE it but so do we, the parents." Toddle About Magazine), and 2014s Letters Through Your Door (.fun, catchy, and pleasingly unpatronising. fRoots Magazine), both of which had families quite literally singing out for more. The music is nothing but eclectic, exploring genres of all kinds, ranging from folk, rock n roll, jazz and country. Yet theres also a thread that runs through all the songs which speaks to the listeners inner child; those simple pleasures long forgotten such as the joy of riding on the top deck of a bus, or growing a sunflower in the garden, are re-awakened and, in that moment, shared by family members, young and old. Its perhaps this shared experience that has made David such a favourite with families up and down the country.

His last two albums were accompanied by extensive touring of theatres, arts centres and festivals including an appearance at the first ever Just So Festival Brasil in Sao Paulo, Brazil and his audience has grown steadily since releasing his first album in 2014. And its not just in the UK that people are starting to take notice; for this third release, David has reached out across the pond and collaborated with American childrens musician, and three-time Grammy nominee, Brady Rymer, who contributes a guest vocal to the record. Rolling Down The Road will be accompanied by an exciting live music stage show, devised by David alongside best selling childrens author Michelle Robinson and produced and directed by Half Moon Theatre in London. The show, which is set to open in September 2019, will be based around the songs and music from his new album and will feature David as the lead performer alongside other guest musicians.

The show will then tour the UK in Spring 2020, with an opening run at The Story Museum in Oxford. Whether youre a frazzled parent trying to find a moments respite or a music aficionado looking for that new record that gets you hitting the repeat button, youll probably reach the same conclusion that this is that rarest of things: an album that everyone can enjoy, no matter what their age.

Title: Rolling Down The Road

The Thing About Bats

It Was The Middle Of The Night

Please Leave The Light On

Riding On The Top Deck Of A Bus

Floating Down The River

A Song For A Friend