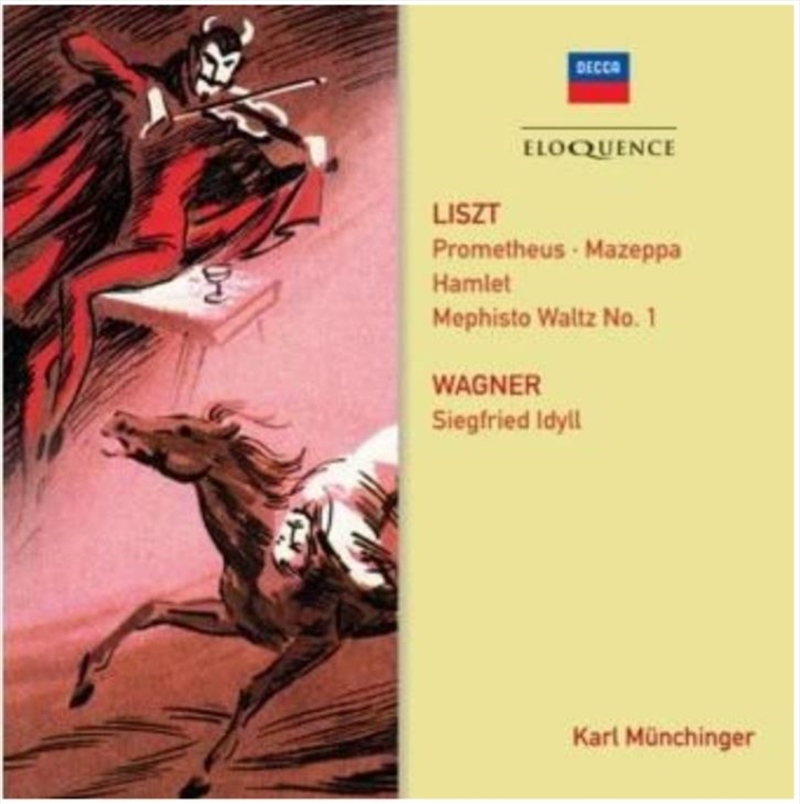 A quartet of Liszt tone-poem recordings, new to CD, plus a cherishable recording of Wagner’s musical birthday card to his wife.

Karl Münchinger founded the Stuttgart Chamber Orchestra in 1946, and Decca began making records with them three years later. The polish and vigour of his work in Baroque repertoire is comprehensively documented by a recent 8CD Eloquence box (4840160), but Münchinger’s repertoire was broader than might be assumed. In addition to their sensitive and stylish interpretation of Haydn and Mozart brought together on another Eloquence box (4840170), the conductor and his Stuttgart ensemble took on Romantic repertoire such as the Siegfried-Idyll of Wagner – a 1951 recording made in Geneva with Munich strings and the winds of the Orchestre de la Suisse Romande.

More adventurously, Decca sent Münchinger to Paris, to conduct the Conservatoire Orchestra. A 10-inch EP of the Mephisto Waltz and Prometheus duly appeared, followed by a full LP which coupled the EP with two more tone-poems, Mazeppa and Hamlet. Although Liszt’s orchestral music was more familiar to audiences in the concert hall than it is now, there were comparatively few recordings: this one of Hamlet appears to be the first, but it effectively conveys both the nervous tension of the story and its gloomy setting of Elsinore.
Münchinger secures fiery playing from the Paris orchestra and holds a firm grasp on Liszt’s unorthodox structures. Captured in Decca’s dynamic mono sound, the Conservatoire brass make thrilling contributions to the Mephisto Waltz and the climactic celebrations of Mazeppa, while the winds contribute much distinctively French timbre to the more poignant evocations of the sufferings of Prometheus.