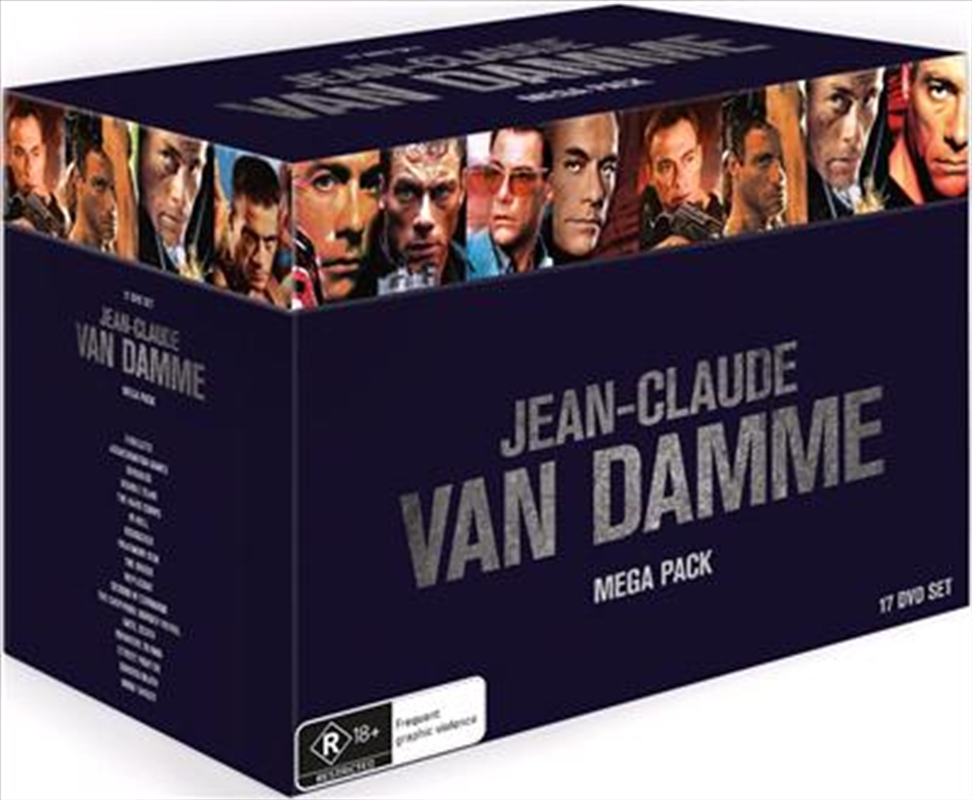 Get ready for edge-of-your seat excitement with one of the biggest martial arts stars of all time, Jean Claude Van Damme. This action-packed collection includes some of Van Damme's most popular films and is a must have for any action fan.

6 BULLETS: An ex-mercenary, known for finding missing children, is hired by a mixed martial arts fighter whose daughter has been kidnapped.

ASSASSINATION GAMES: Two assassins agree to work together as one tries to avenge his wife and the other collect a reward for a job.

DERAILED: On an out of control train, holding hostages and high-tech bio-weapons agent Kristoff becomes a one man army to derail the terrorists and save the lives of everyone on board.

DOUBLE TEAM: An international spy teams up with an arms dealer to escape from a penal colony and rescue his family from a terrorist.

THE HARD CORPS: A former soldier assembles a team of tough bodyguards to protect an ex-boxer. The one-time champ is targeted by a rap mogul who has recently been released from prison. The ex-con blames the boxer for putting him behind bars-and will stop at nothing to wreak his revenge.

IN HELL: A man must survive a prison where hardened criminals battle to the death for the wardens' entertainment.

KICKBOXER: Kurt Sloane must learn the ancient kick boxing art of Muay Thai in order to avenge his brother.

MAXIMUM RISK: A cop discovers that he had a twin who was just murdered in Nice, France. In order to find out who did it, he teams up with his twin Mikhail's love and assumes his identity.

THE ORDER: A playboy finds himself in a dangerous world of martial arts and ancient evil when he travels to Jerusalem to investigate the disappearance of his archaeologist father.
REPLICANT: Detective Jake Riley is on the trail of serial killer Edward "The Torch" Garrotte. Riley is contacted by a government agency that has created a clone of Garrotte using a secret technology and the replicate teams with Riley to help track down the killer.

SECOND IN COMMAND: An official has just been appointed as Second in Command to the U.S. Ambassador at an American Embassy in a small, turbulent Eastern European nation. When local insurgents attempt a coup d'etat, the nation's President takes refuge inside the embassy.

THE SHEPHERD: BORDER PATROL: A former New Orleans cop battles drug cartels and ex-Army Special Forces who are smuggling drugs from Mexico into U.S. through a Texas border town.

UNTIL DEATH: Stowe, a dirty cop who is hooked on heroin, is disliked by his fellow officers. An accident and he is put into a coma and comes out of it a better person. But after an accident that puts Stowe in a coma, he awakens wanting to redeem himself.

STREET FIGHTER: Colonel William Guile leads an army of soldiers into the country of Shadaloo to find traces to lead him to General M. Bison, who has captured many people including three missing soldiers.

SUDDEN DEATH: A former fireman takes on a group of terrorists holding the vice President and others hostage during the seventh game of the NHL Stanley Cup finals.

HARD TARGET: A woman hires a drifter as her guide through New Orleans in search of her father, who has gone missing. In the process, they discover a deadly game of cat and mouse behind his disappearance.