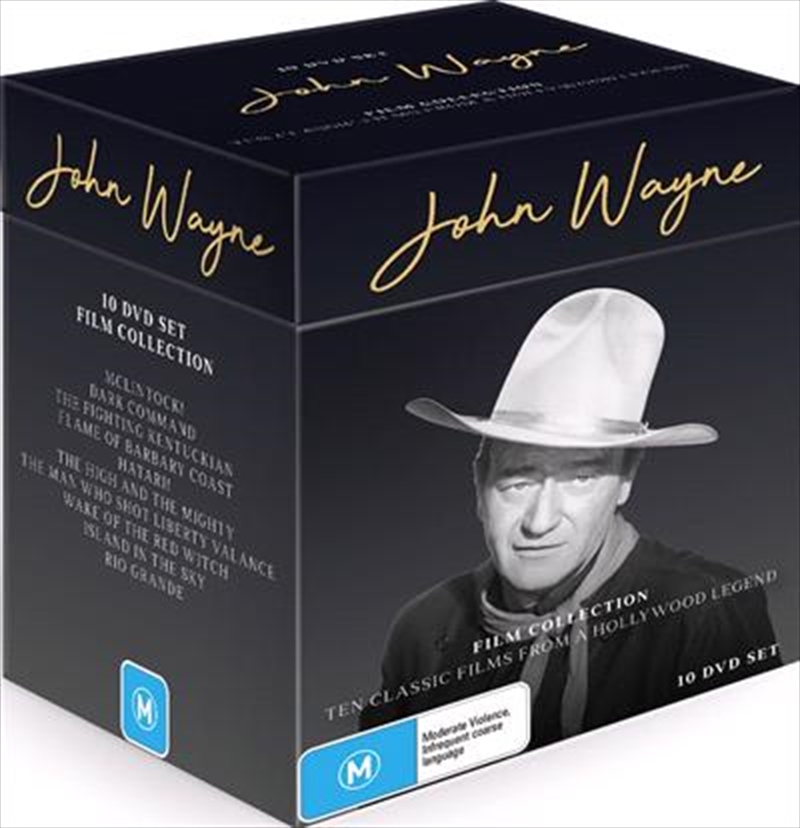 A Hollywood Legend Like No Other, Academy Awardr Winner John Wayne Remains A True American Icon. On Horseback In The Wild West Or In Battle On The Front Lines, "Duke" Stands Tall As The Silver Screen'S Greatest Hero. Gathered Together Here For The First Time Are Ten Of His Most Outstanding Films.

MCLINTOCK: Aging rancher George Washington McLintock (John Wayne), a wealthy self-made man, is forced to deal with numerous personal and professional problems. Seemingly everyone wants a piece of his enormous farmstead, including high-ranking government men, McLintock's own sons and nearby Native Americans. As McLintock tries to juggle his various adversaries, his wife, who left him two years previously, suddenly returns. But she isn't interested in her husband--she wants custody of their daughter.

THE DARK COMMAND: As the Civil War erupts, the townsfolk of Lawrence, Kansas side with either the North or the South, and a deeply embittered sheriff allies himself to the South as a cover for his outlaw gang to pillage and intimidate those who support the North. When his wife realizes his true violent nature, he not only has to rescue her but save the town.

THE FIGHTING KENTUCKIAN: Marching with his company across Kentucky, soldier John Breen meets Fleurette (Vera Ralston), daughter of exiled French general Paul De Marchand (Hugo Haas), who's the leader of a community settled by Napoleon's former soldiers. Fleurette is engaged to Blake Randolph (John Howard), a businessman colluding with George Hayden (Grant Withers) to take back the land granted to the French. In love with Fleurette and furious with Blake's scheming, John helps the French fight back.

FLAME OF BARBARY COAST: A Montana cowboy heads for San Francisco to collect a debt, falls in with gamblers and a dance hall girl and is caught in the 1906 earthquake.

HATARI: A Tanganyka-based group of hunters (Red Buttons, Hardy Kruger, Gerard Blain) led by Sean Mercer (John Wayne) trap wild African animals for zoos. A curvaceous reporter (Elsa Martinelli) documents their exploits while having epic clashes with the gruff Irishman. She is initially frozen out of the testosterone-filled group until her strong-willed personality endears her to the men.

THE HIGH AND THE MIGHTY: On a flight from Hawaii to California, the engine dies on the plane Dan is flying. As he prepares for a crash landing, the passengers reassess their lives.

THE MAN WHO SHOT LIBERTY VALANCE: Questions arise when Senator Stoddard (James Stewart) attends the funeral of a local man named Tom Doniphon in a small Western town. Flashing back, we learn Doniphon saved Stoddard, then a lawyer, when he was roughed up by a crew of outlaws terrorising the town, led by Liberty Valance (Lee Marvin). As the territory's safety hung in the balance, Doniphon and Stoddard, two of the only people standing up to him, proved to be very important, but different, foes to Valance.

WAKE OF THE RED WITCH: Captain Ralls commands the Red Witch, a ship in the fleet of Dutch shipping baron Mayrant Ruysdaal Sidneye (Luther Adler). Ralls has an old feud with the skipper, who years ago took from him the woman he loved, Angelique (Gail Russell). In an act of revenge, Ralls sabotages the ship, causing Sidneye to take action against him. With the whole group together on a remote island, Angelique professes her love for the brooding Ralls, but the situation may be too complicated to mend.

ISLAND IN THE SKY: While flying supplies to England during World War II, Captain Dooley is forced to crash land his plane in the icy wilds of Canada. Together, Dooley and his hardy crew struggle to survive in uncharted territory--with the arctic temperature steadily dropping. Meanwhile, back at the army headquarters in Maine, Colonel Fuller (Walter Abel) rallies his capable crew in a desperate search for the downed airmen, knowing that every second counts.

RIO GRANDE: Lieutenant Colonel Kirby Yorke heads a cavalry post on the Texas side of the Rio Grande, defending settlers against Apaches launching raids from the Mexican side of the river. When Yorke's 16-year-old son, Jeff (Claude Jarman Jr)--who he has not seen since he was a baby--shows up at the post as one of the new recruits, he treats him more harshly than the others. Things are further complicated when Yorke's estranged wife, Kathleen (Maureen O'Hara), returns to take her son home.