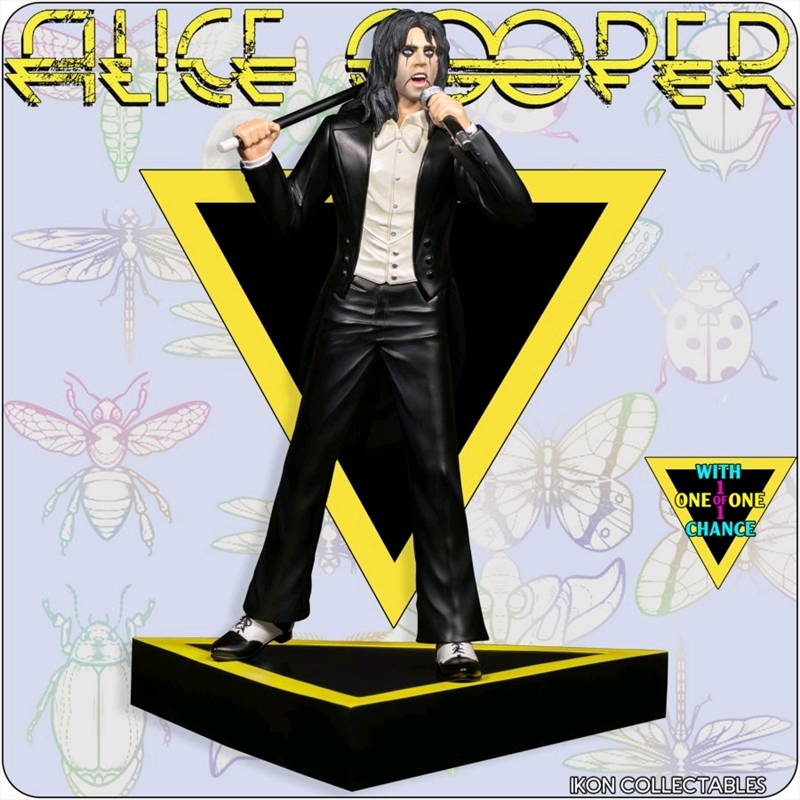 The godfather of Shock Rock himself, Alice Cooper, is now available as a 1/6 scale resin statue.

Credited with transforming the rock 'n' roll genre via the introduction of creative inspiration from horror films, vaudeville and garage rock, Alice Cooper designed his shows to shock - and that they did!

Known for his dress code of heavy eye makeup, suits to represent the ages and accessories to terrify, one of his most iconic outfits is featured here. The Welcome to My Nightmare album marked the beginning of his solo career, and this perfectly sculpted statue taken from the 1975 album and subsequent tour, personifies all that is Alice Cooper - the suave meets the macabre.

This 34cm statue features 3 interchangeable arms - holding top-hat, holding cane over his shoulder and with a clenched fist, personifying Alice Cooper the man and his legendary stage presence.

This range also features in Ikon Collectable’s 1-of-1 range. 5 variant statues have been created and randomly inserted into the production run, to give you a one in fifty chance of receiving a one of a kind variant. We have managed to secure the signature of Alice Cooper himself, that will form two pieces of this 1-of-1 set. Signed directly onto the base of the standard black suit and the alternate white suit statues, these variant will be highly sought after.
The five variants are -
-Signed Black Suit
-Signed White suit
-White suit
-Blood Splatter Black Suit
-Blood Splatter White Suit

Only 250 pieces are available worldwide so grab your piece of Alice Cooper history here!