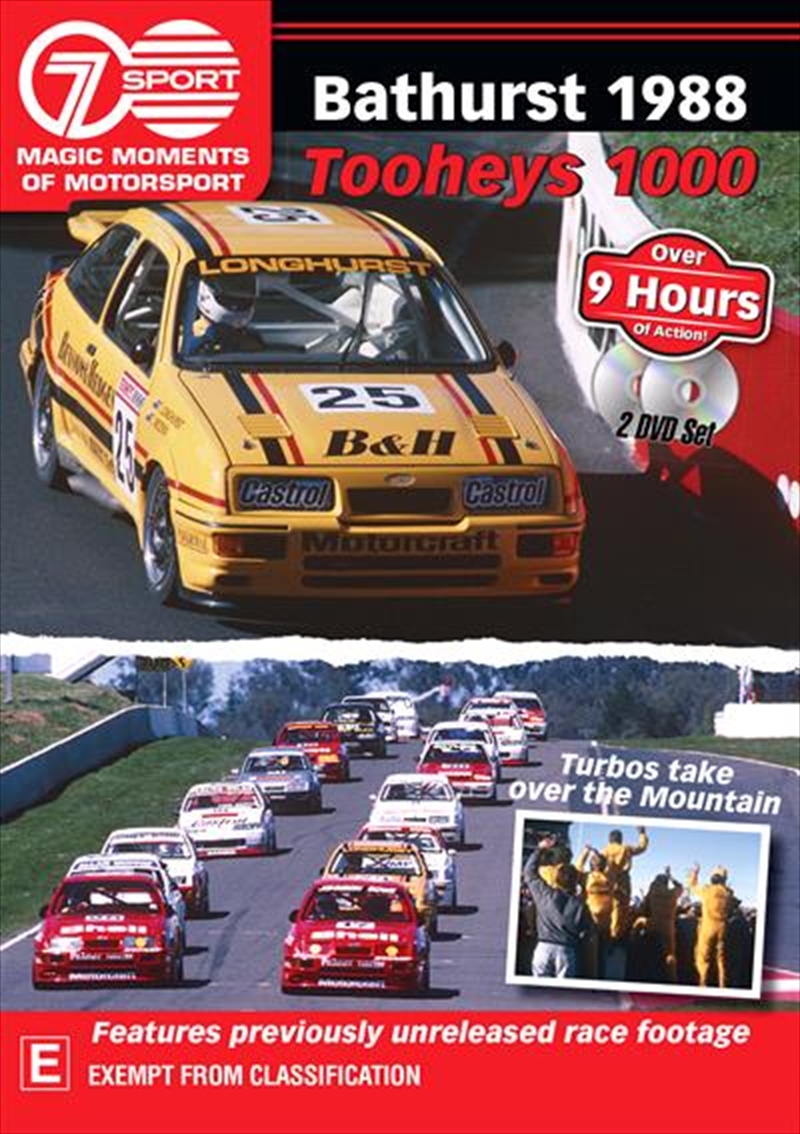 Turbos take over the Mountain - THE 1988 Tooheys 1000 at Mount Panorama, Bathurst was a race that marked the real beginning of the era of turbocharged cars reigning supreme in Australia's Great Race.For the very first time, the full Seven Sport telecast of the 88 race - won by Tony Longhurst and Tomas Mezera - has been released here as part of the popular Seven Sports Magic Moments of Motorsport DVD series. The 1988 race featured an entry list packed full of local and international talent. A horde of turbocharged Ford Sierras were set to dominate, led by Dick Johnsons three car Shell assault, Allan Moffats ANZ version, Longhursts B&H example and privateer Andrew Miedeckes rapid turbo Ford. Defending race winner Peter Brock had left Holden and drove a Mobil BMW in that years race with Holden honour left in the hands of Larry Perkins and Tom Walkinshaw under the Holden Special Vehicles banner with the new fuel-injected Batmobile, Walkinshaw-built VL Group A SV Commodore. A total of 48 cars lined up for the 1988 Tooheys 1000 and included on this release is the full race day telecast including the pre-race festivities, highlights of the Tooheys Top 10 Shootout, Sunday morning warm-up session, Formula Ford and Production Car support races and then the main course, the 161-lap Mountain classic. This release also includes a range of unseen vision too. We have included on this DVD the race action that unfolded while television viewers of the day were busy watching commercials!Commentary for the 1988 Bathurst race includes the familiar voices of Mike Raymond, Neil Crompton (who also made his Bathurst 1000 debut in the race in a Brock Mobil BMW), Garry Wilkinson and the Bathurst commentary debut of Doug Mulray. This DVD is a must-have for your collection of Seven Sport Magic Moments of Motorsport titles, celebrating a brilliant era of racing at Bathurst.