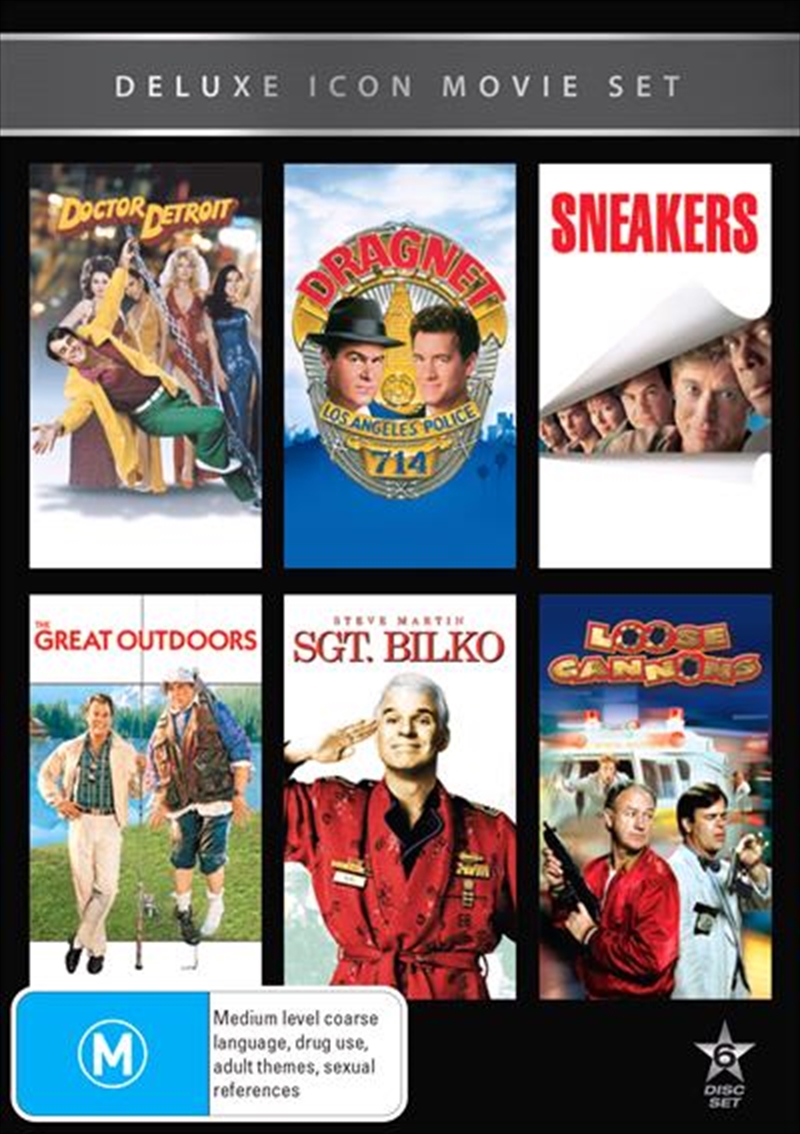 Doctor Detroit
Comedy superstar Dan Aykroyd stars as a mild-mannered professor of chivalry and infamous underworld pimp in the hilarious comic romp Doctor Detroit. When Professor Clifford Skridlow (Aykroyd) accidentally gets conned into taking on the persona of 'Doctor Detroit,' he soon finds himself up to his neck in luscious ladies, the Chicago Mob, and a notorious crime czar called 'Mom' (Kate Murtagh). It's comedic chaos all the way as Aykroyd attempts to juggle two very different career paths without losing his life or his mind. From the producers of The Blues Brothers, and co-starring Donna Dixon and Fran Drescher, comes the laugh-out-loud film about a man committed to making the world safe for insanity.

Dragnet
This is the city… and only Dan Aykroyd and Tom Hanks can save it in this hilarious box-office blockbuster that pays homage to the famed original police drama of the ‘50’s and ‘60’s. Aykroyd is at his comedic best as the namesake nephew of Detective Sgt. Joe Friday. Like his uncle he’s a blue suited, by-the-rules cop who reluctantly joins forces with his footloose partner Pep Streebek (Hanks) to rescue the City of Angels from the machinations of a power-mad Reverend and corrupt Police Commissioner. And those are 'just the facts' of this hysterically funny action comedy.

Sneakers
Computer hacker Martin (Robert Redford) heads a group of specialists who test the security of various San Francisco companies. Martin is approached by two National Security Agency officers who ask him to steal a newly invented decoder. Martin and his team discover that the black box can crack any encryption code, posing a huge threat if it lands in the wrong hands. When Martin realizes the NSA men who approached him are rogue agents, they frame him for the murder of the device's inventor.

The Great Outdoors
Comedy legends Dan Aykroyd and John Candy team up for the ultimate family vacation gone wrong in The Great Outdoors. When an uninvited and unwelcome family suddenly arrives to join their relatives for a summer of relaxation, the results are anything but restful. Chet Ripley’s (Candy) plans for a quiet vacation at a lakeside resort quickly take a turn when his obnoxious brother-in-law, Roman Craig (Aykroyd), and his snooty family appear unannounced and ready to join for a season of 'fun' in the sun. Unfortunately, the only thing these two in-laws have in common is their intense dislike for each other. Soon, it’s brother-in-law against brother-in-law in an uproarious and hilarious fight to the finish!

Sgt. Bilko
When not trafficking in contraband, Sgt. Bilko (Steve Martin) oversees his base's gambling operations and occasionally runs a little con game, all under the oblivious nose of his commanding officer, Col. Hall (Dan Aykroyd). After Bilko's old nemesis, Maj. Thorn (Phil Hartman), shows up, intent on ruining his career and stealing his girlfriend, Rita (Glenne Headly), Bilko must take extra care to cover his tracks while concocting the perfect scheme to take down his foe.

Loose Cannons
Gene Hackman and Dan Aykroyd star as mismatched partners in this outrageous comedy from the director of PORKY’S. Aykroyd is a brilliant police detective who always hides his true identity. But he’s not undercover— he’s schizophrenic! Together, Hackman, Aykroyd and Aykroyd’s personal cast of thousands tackle a baffling murder with a trail that leads all the way back to Adolph Hitler. The FBI and the Israeli secret service can’t solve the case, but then they don’t have Aykroyd’s multitude of personalities on their team. Suspense and comedy collide in this off-the-wall thriller that’s loaded with personality.