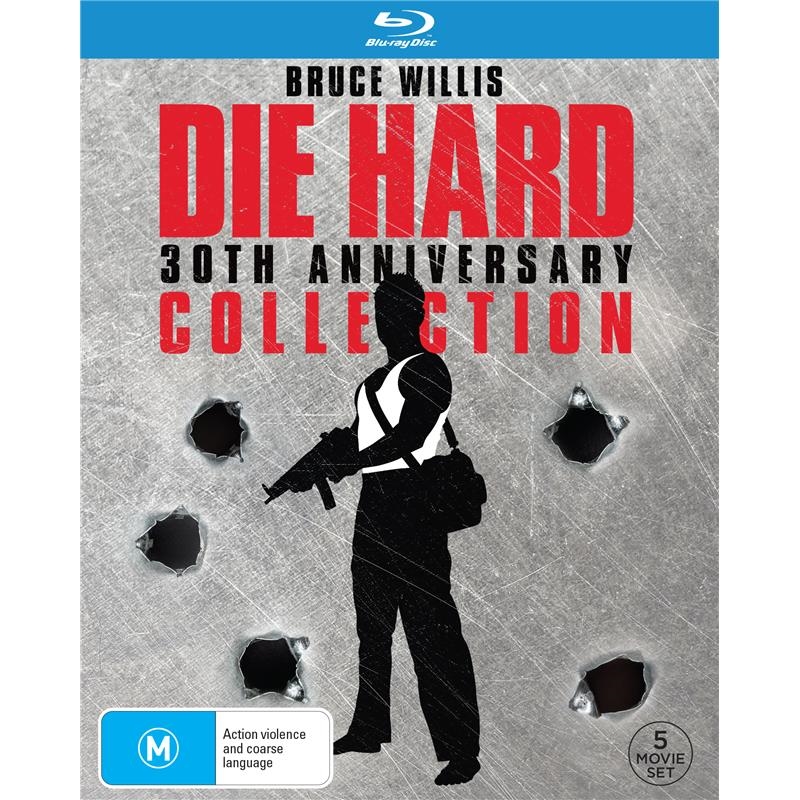 DIE HARD: John McClane (Bruce Willis) is a New York cop who flies to L.A. on Christmas Eve to visit his wife at a party in her company's lavish high-rise. Plans change once a group of terrorists, led by Hans Gruber (Alan Rickman), seize the building and take everyone hostage. McClane slips away and becomes the only chance anyone has.

DIE HARD 2: On a snowy Christmas Eve in the nation's capital, off-duty cop John McClane battles a team of terrorists who have taken over a major international airport, while he copes with an inept airport police chief, the stubborn head of the army's anti-terrorist squad, and the knowledge that his wife is trapped in a plane circling overhead!

DIE HARD WITH A VENGEANCE: Detective John McClane, who, as always, is in the wrong place at the wrong time. In this adrenalin charged, action packed thriller, things are not going well for John McClane: his marriage is breaking up, he has been suspended from the force and now the brother of Hans Gruber, the German terrorist he threw off a building a few years back, is threatening to blow up a school if McClane does not run around the city solving his demeaning and dangerous puzzles. With the help of Zeus, a Harlem electrician, McClane discovers Grubers plot to distract the NYPD while he clears the federal bank of billions of dollars of gold.

DIE HARD 4.0: When a criminal plot is in place to take down the entire computer and technological structure that supports the economy of the United States (and the world), it's up to a decidedly "old school" hero, police detective John McClane to take down the conspiracy, aided by a young hacker.

A GOOD DAY TO DIE HARD: John McClane, is the heroic New York cop with a knack for being in the wrong place at the right time. John's latest predicament takes him all the way to Russia to track down his estranged son, Jack (Jai Courtney), who has been imprisoned in Moscow. But the mission takes a deadly turn as father and son must join forces to thwart a nuclear weapons heist that could trigger World War III!