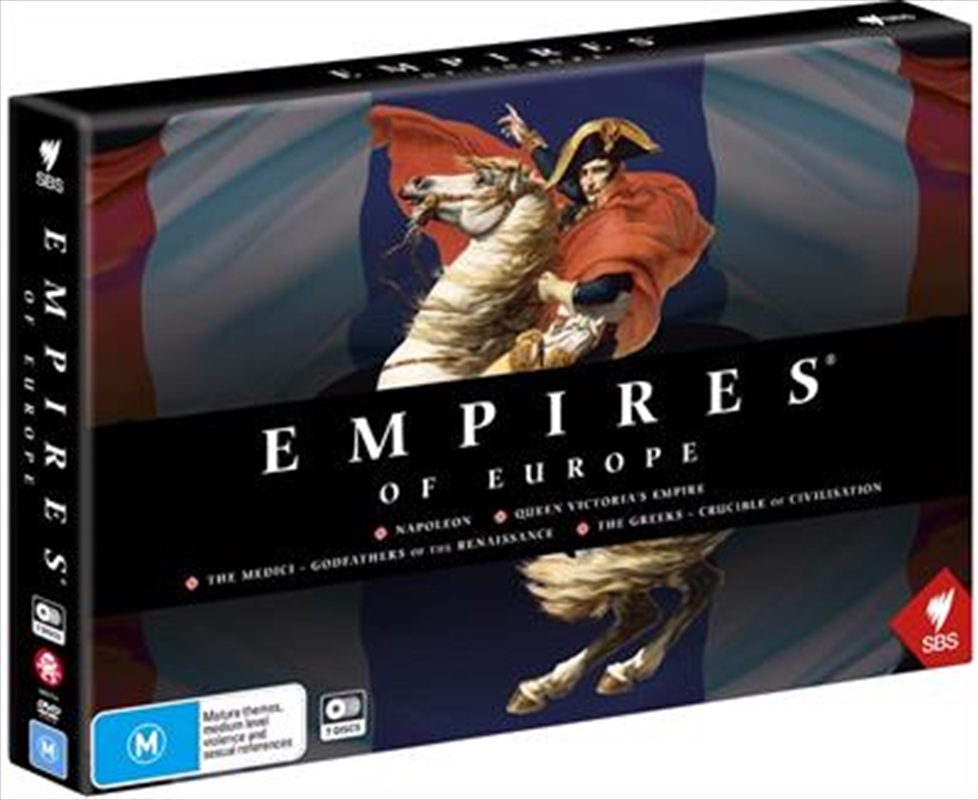 Check store availability
DESCRIPTION
EMPIRES: NAPOLEON x 2 disc Napoleon soldier, emperor, lover, statesman. For nearly two decades he strode the world stage like a colossus loved and despised, venerated and feared. From his birth on the rugged island of Corsica to his final exile on the godforsaken island of St Helena, Napoleon brings this extraordinary figure to life. Episode 1 To Destiny Episode 2 Mastering Luck Episode 3 The Summit of Ambition Episode 4 The End
EMPIRES: QUEEN VICTORIA'S EMPIRE x 2 disc At the time of Queen Victorias birth in 1819, England was an agrarian society. Within a few short decades, this small island nation would be transformed into an industrial superpower, with an empire spanning the globe. Queen Victorias Empire is both the story of this remarkable time, and an engaging portrait of a Queen who ruled over one-fifth of the worlds population. It is the story of the influential figures that would shape a distinctively British imperialism: Gladstone, Disraeli, Livingstone, Rhodes and Prince Albert, Victorias husband. These figures would fuel an expansion unequalled in history, forever changing Britain and the lands it controlled. Episode 1 Engines of Change Episode 2 Passage to India Episode 3 The Moral Crusade Episode 4 The Scramble for Africa
EMPIRES: THE MEDICI - GODFATHERS OF THE RENAISSANCE x 2 disc From a small Italian community in 15th Century Florence, the Medici family would rise to become one of the most powerful dynasties in Europe. Using charm, patronage, skill, duplicity and ruthlessness, they would amass unparalleled wealth and unprecedented power. Their story is a bloodthirsty one, of ambition and triumph, murder and revenge. But it is also a tale of inspiring achievement and cultural revolution, of mans pursuit of beauty and perfection, liberty and intellectual inquiry. Episode One - Birth of a Dynasty Episode Two - The Magnificent Medici Episode Three - The Medici Popes
EMPIRES: THE GREEKS - CRUCIBLE OF CIVILISATION x 1 disc The Greeks Crucible of Civilisation recounts the rise, glory, demise and legacy of the empire that marked the dawn of Western Civilisation. In the fourth and fifth centuries, BC, the Greeks built an empire that stretched across the Mediterranean from Asia to Spain. They laid the foundation of modern science, politics, warfare and philosophy, and produced some of the most breathtaking art and architecture the world has ever seen. It was perhaps the most spectacular flourishing of imagination and achievement in recorded history. Episode 1 The Birth of Democracy Episode 2 The Golden Age Episode 3 The Collapse of Confidence
DETAILS