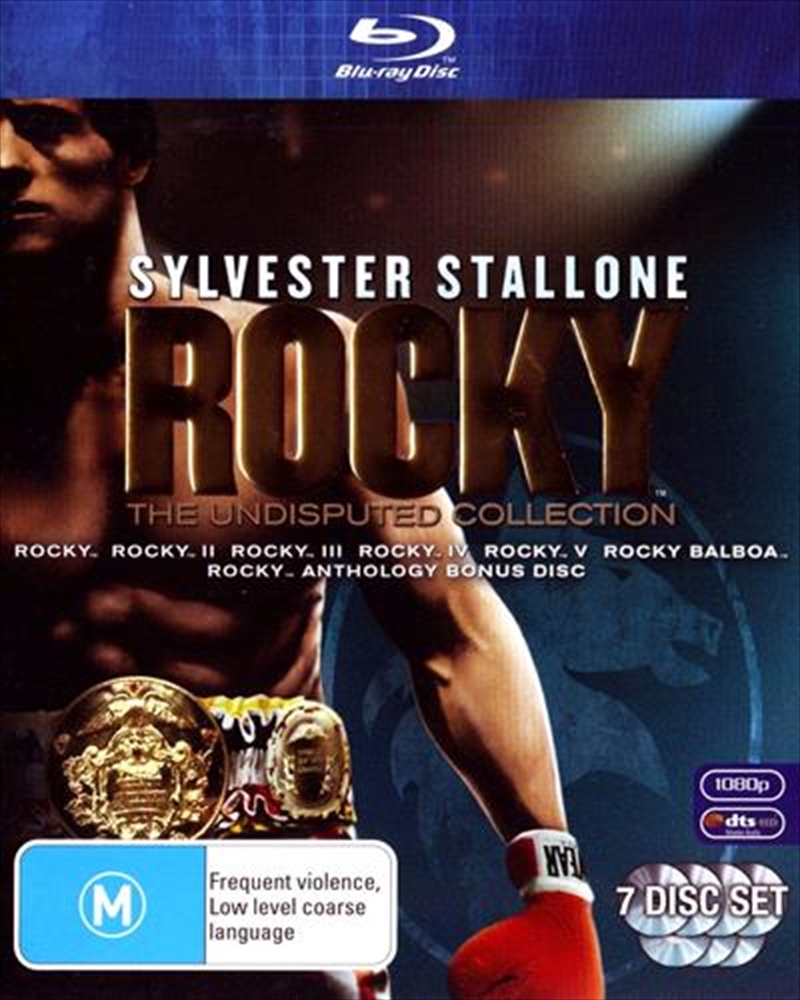 Shipping - See delivery options.
Postcode:
Quantity:
SEE MORE IN:
Up To 50% Off Boxsets Sylvester Stallone Movies Rocky Bingeworthy Boxsets Movie Collections
DESCRIPTION
Contains all Rocky titles:
Rocky:
Rocky Balboa is a struggling boxer trying to make the big time. Working in a meat factory in Philadelphia for a pittance, he also earns extra cash as a debt collector. When heavyweight champion Apollo Creed visits Philadelphia, his managers want to set up an exhibbition match between Creed and a struggling boxer, touting the fight as a chance for a "nobody" to become a "somebody". The match is supposed to be easily won by Creed, but someone forgot to tell Rocky, who sees this as his only shot at the big time.

Rocky II:
Rocky Balboa takes on Apollo Creed in this powerful follow-up to one of the most acclaimed movies in film history. Writer/Director/Star Sylvester Stallone succeeds in creating a powerful feel-good movie. After club fighter Rocky Balboa (Stallone) goes the distance with the world heavyweight champion, boxing fans clamour for a rematch. But Rocky, having sustained massive injuries in the bout, announces his retirement. Though he tries to make a new life for himself, Rocky realises that he can't escape his true calling. The ring beckons once more, and the "Italian Stallion" must prepare for the fight of his life.

Rocky III:
Rocky battles his most powerful adversary yet - the ferocious Clubber Lang (Mr.T) - in this hard hitting actioner that comes out swinging with adventure, humour and emotionally charged human drama. For what may be the most exciting and fast-paced film in the series, Sylvester Stallone write, directs and stars with explosive passion and intensity. As Rocky Balboa (Stallone) fights his way into he hearts of millions, life couldn't be better. He scores ten consecutive wins, lands lucrative endorsement contracts, and becomes famous throughout the world. But when Clubber Lang K.O.s Rocky in a humiliating defeat, it becomes apparent that the "Italian Stallion" has lost his edge. Considering hanging up the gloves, Rocky receives encouragement from an unlikely ally: his old nemesis, Apollo Creed (Carl Weathers). With Creed's help, Rocky strives to regain the "eye of the tiger" before confronting Lang in a gruelling rematch for the world heavyweight championship.

Rocky IV:
Rocky takes on a vicious Soviet fighter who literally killed his last opponent! Sylvester Stallone writes, directs and stars in this war between nations in which the only battle is being fought in a boxing ring. Rocky (Stallone) proudly holds the world heavyweight boxing championship, but a new challenger has stepped forward: Drago (Dolph Lundgren), a six-foot, four-inch 261-pound fighter who has the backing of the Soviet Union. This time, Rocky's training regimen takes him to icy Siberia, where he prepares for a globally-televised match in the heart of Moscow. But nothing can truly prepare him for what he's about to face - a powerfully charged fight to the finish in which he must defend not only himself, but also he honour of his country!

Rocky V:
Upon returning home from his latest triumph, Rocky learns that all of his money has been lost by an unscrupulous financial advisor. To make matters worse, his fight-related injuries force his retirement from the ring. So Rocky, his wife Adrian and his son Rocky Jr. move to their old low-rent neighborhood in South Philadelphia. There, the fighter must resolve the deep-rooted resentment held by his son, a bitterness that grows when Rocky trains Tommy Gunn, a young boxer who soon rises to national prominence. When Tommy turns against his mentor and publicly taunts him, Rocky knows he must fight once more!

Rocky Balboa:
Rocky is a longtime retired boxer and remembered by most as one of the greatest boxing champions in the world. He now lives back in the skids of Philadelphia but manages a good life including running his restaurant Adrian's, helping an adult Little Marie and her son Steps, and saying hello at any opportunity to his estranged son Robert. After seeing a virtual fight of Rocky in his prime vs. heavyweight champion Mason "the Line" Dixon, Rocky's interest in fighting sparks again and he plans to fight in local clubs. Mason Dixon and his managers have a different agenda though, with a plan to pit Rocky vs. Mason in real life for a publicity act to regain Mason's lost respect from his fans. Finally agreeing to Mason Dixon's proposal, Rocky prepares to step in the ring for one last time.
DETAILS